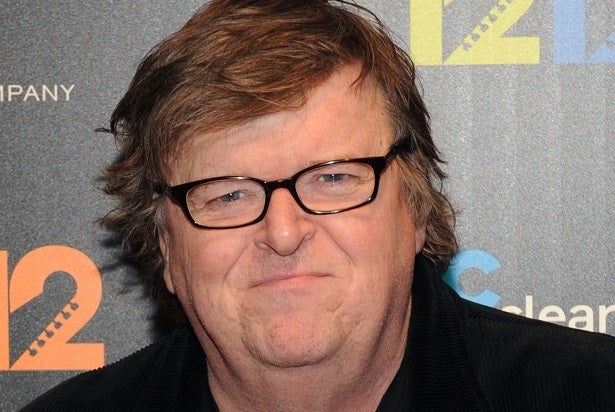 Along with a photo of a gravesite with an American flag, the documentary filmmaker tweeted a tribute to his uncle, a World War II veteran, who was killed by a sniper’s bullet.

My uncle's grave in Flint, with the flag I placed there in October. Killed by a sniper in WWII on March 10, 1945. RIP pic.twitter.com/P1eh7OikaI

The Oscar winner went into more detail in a lengthy Facebook post he titled “My 12 Years of Support for the Troops.”

He wrote: “Before I post my more general thoughts later today or tomorrow about the ruckus of the past week regarding the response to my heartfelt comment on Twitter about my uncle who was killed in World War II by a sniper – and how I was taught to despise snipers of any stripe – I would like to address this one insane mantra that the right-wing has twisted my tweet into: ‘ hates the troops.'”

Sunday’s social media posts came after Moore last week defended an earlier tweet that said “snipers aren’t heroes.” He came under attack when several websites wrote stories on his comments, prompting Moore to deny that he was weighing in on the debate surrounding Clint Eastwood’s “American Sniper.”

“But Deadline Hollwood and the Hollywood Reporter turned that into stories about how I don’t like Clint Eastwood‘s new film, ‘American Sniper’ I didn’t say a word about ‘American Sniper’ in my tweets,” Moore said as he refuted claims he was firing shots at America’s No. 1 movie.

The Warner Bros.-distributed Village Roadshow war movie starring Bradley Cooper was nominated for six Academy Awards including Best Picture and Actor on Jan. 15. It opened wide the next day and shot to No. 1. It has since broken box-office records for January and raced to $200 million in grosses in just 10 days.

But Moore and a number of others have been critical, saying the film wrongly glorifies Chris Kyle, the real-life Navy SEAL marksman whose autobiography is the basis of the film.

“My 12 Years of Support for the Troops “

Before I post my more general thoughts later today or tomorrow about the ruckus of the past week regarding the response to my heartfelt comment on twitter about my uncle who was killed in World War II by a sniper – and how I was taught to despise snipers of any stripe – I would like to address this one insane mantra that the right-wing has twisted my tweet into: “ hates the troops.”

Well, who would know better about hating our troops than those who supported sending them into a senseless war Iraq in the first place?

And, for 4,482 of them, a senseless, unnecessary and regrettable death.

If you supported that invasion, if you voted for George W. Bush and the Republicans and Democrats who backed this war, then you are the ones who have some ‘splainin’ to do. Not me. You.

Because only “haters” of our brave young men and women would recklessly send them into harm’s way for something that had absolutely nothing to do with defending the United States of America. Nothing. Nothing to do with 9/11. Nothing. In fact, WE, the USA, were the ones who provided Saddam with his weapons in the 1980s that he used against the Kurds. We wanted him to use them against the Iranians, but you hand a crazy guy crazy weapons, something crazy is probably going to happen. Ask Osama bin Laden about that — what he did with the crazy training, crazy money and crazy weapons that WE gave him. Oh wait. You can’t ask him. Because the new president took him out. No 150,000 troop invasion necessary. Just 12 or so Navy SEALS and two and a half choppers.

Here’s the truth they can’t or won’t report: I’M the one who has supported these troops – much more than the bloviators on Fox News. To prove it (and I know this is going to crush some of you out there), here’s just a partial list of all the things I do and have done for those men and women who serve — and I guarantee you, you’ve never heard any of this reported about what the real me does because, frankly, it messes up their little story of the fictional “” they’ve created for your hate and enjoyment (please feel free to cut, paste and send this to your conservative brother-in-law):

** I have an aggressive affirmative action policy specifically to hire Iraq and Afghanistan veterans at my film production company, my movie theaters in Michigan and my film festival. I have asked other businesses in my town (and nationwide) to join with me on this. http://www.traverseticker.com/…/michael-moore-asks-business… . A vet was an editor on my films “Fahrenheit 9/11” and “Sicko” and a vet (who served in both Iraq AND Afghanistan) is the projectionist at my flagship theater in Michigan (to name a few).

** I also ask people to post a sign I designed and have made available: “I Shop Where Vets Work”. Here’s my policy and the poster: http://www.statetheatretc.org/veterans#opening (Can someone at Fox News send me your posted affirmative action program to hire Iraq and Afghanistan vets?)

** Since I opened my movie theaters in northern Michigan, this has been my admission policy: “Admission to all movies at my theaters is FREE, 365 days of the year, for ALL active duty military and their families.”

** I allow local veterans support groups to use my theater to meet for PTSD issues, I host quarterly PTSD summits, and I’ve hosted a conference to start a jobs movement for vets in our town.

** I have raised tens of thousands of dollars through my website for groups that help veterans and wounded warriors: http://web.archive.org/…/20140829053240/http://fa…/soldiers/

** In the early years of the war I made all my books and DVDs available free of charge to all service members through BooksForSoldiers.com

** I produced and hosted a benefit for military families at the House of Blues that received national attention to their plight (raw clips here from the AP: https://vimeo.com/117687290 )

** I will NOT do business with vendors who don’t have a policy to hire vets.

** I gave voice to the troops who weren’t being heard by publishing a book of their letters from the front lines in “Will They Every Trust Us Again?” (NY Times bestseller for 4 weeks)

** I regularly post blogs from troops http://www.ivaw.org/blog/ivaw-featured-michael-moore and I show and support many movies about what they’ve gone through in the past 12 years at my theaters.

** I took vets, soldiers and their families on a 60-city tour of the country so their concerns could be heard: https://www.youtube.com/watch?v=wm3IsgoBNc0

** I helped Iraq Vets against the War with “Operation Recovery” http://www.ivaw.org/operation-recovery and http://www.huffingtonpost.com/…/how-bout-dinner-just-you_b_…
** My movie, – #1 selling/#1 rental on all military base PXs

** My books were the #1 requested books by troops from the nonprofit BooksForSoldiers.com

** I sit on the Advisory Board of the Pvt. Bradley (Chelsea) Manning Support Network

** From the Dept. of Irony: I only hire Navy SEALS and ex-special forces for when I need security – such as this week, when so-called supporters of those SEALs want me harmed.

** When my father passed away this year, in lieu of flowers I asked that donations by made in my dad’s name to the veterans group, Veterans for Peace. Enough money was raised so that the Vietnam Vets chapter could build a home in Vietnam for a family still suffering from the effects of Agent Orange. It’s being dedicated in my dad’s name.

** I am currently showing “American Sniper” at my theater that I helped restore and that I program and help run in Manistee, MI. Not because I like it, but because, unlike the other side, I’m not a censor. I trust smart people and people of good heart will know what to do. You can’t have a conversation about what is up to if you haven’t seen what it is he’s up to. And regardless where u are on the political spectrum, you’ll see that every character in Clint’s film comes out dead or permanently damaged. This ain’t no John Wayne rah-rah pablum. Eastwood made maybe the greatest western ever – “Unforgiven” – but now it’s sad seeing him talking to an empty chair on a stage or making an Iraq movie that Rolling Stone this week called, “too dumb to bother criticizing.”

In the end, the thing I’m most proud of for what I’ve done for the troops was sticking my neck out 12 years ago to become a leading opponent to Bush and the war. I tried to save more lives than a sniper ever could hope to — by preventing us from going to war in the first place. Well, I failed at that. But I’ve done everything else humanly possible to try and make it up to those troops when they return home — that is, the ones lucky enough to return home.

So, Fox News and the other lazy media — quit making shit up about me! You look ridiculous. If you want to have a debate with me about the ISSUES and the POLICIES, then let’s have it. If you want to debate a movie that’s trying to rewrite history, then let’s have that. But when you hide behind falsehoods and then use them to try and manipulate the public, then all you are is afraid. Afraid of me, an unarmed American, and the truth I bring along as my sidekick. Only cowards have to lie. Be brave. Report the truth. It will feel good.