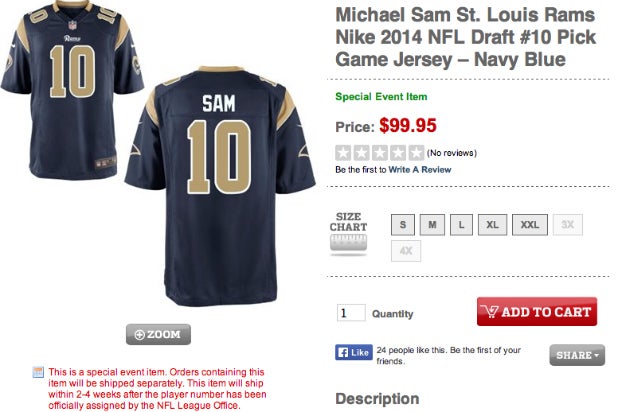 A few more jerseys sold and we might have to start calling Michael Sam “Mikey Football.”

The 249th overall pick of this weekend’s NFL Draft — the first openly gay player to be drafted into the National Football League — boasts the second-top-selling rookie jersey since Thursday, best on the defensive side of the ball.

The only Nike uniform among rookies to top Sam — the St. Louis Rams’ final 2014 selection — is fan favorite “Johnny Football,” the Cleveland Browns’ new quarterback, Johnny Manziel. It is very probable that those newbies outsold veterans Russell Wilson and Peyton Manning — who are selling very well this offseason — over the weekend, though the NFL won’t have specific numbers to compare until the end of the month.

The Texas A&M QB was the 22nd overall selection in the NFL Draft’s first round, which means his Nike jersey has been for sale online since Thursday evening — as has the rest of the Top 5, which Sam’s sales best. Sam’s uniform came online late Saturday afternoon.

The league does not release actual sales figures and Nike did not immediately respond to TheWrap‘s request for data.