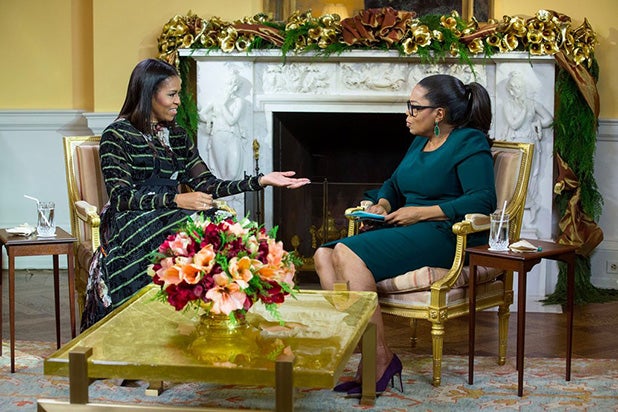 We’re sorry folks, but Michelle Obama says she has no plans to run for office.

In an interview for CBS and the Oprah Winfrey Network, the first lady flatly denied that she was even exploring the possibility of pursuing a presidential run of her own.

“If I were interested in it, I’d say it. I don’t believe in playing games. It’s not something I would do,” Obama said in the interview with Oprah Winfrey. “But it also speaks to the fact that people don’t really understand how [being in the White House] is.”

Also Read: Michelle Obama Tells Oprah: 'We Are Feeling What Not Having Hope Feels Like' (Video)

Supporters of the first lady and her presidential husband have been wondering whether or not she would challenge Donald Trump for the White House in 2020, but Obama said she’s “not having conversations” about running for any type of office. “I don’t know what they’re talking about. But I’m not talking back,” she said of the Democratic party.

Not only is Obama not interested in taking a role in politics for herself, but Obama also said she couldn’t put her family under the pressure of the spotlight again.

“What people don’t understand is that you run — their lives stop at any age,” she said of her two daughters, Sasha and Malia. “I mean, the next family that comes in here, every person in that family, every child, every grandchild, their lives will be turned upside down in a way that no American really understands. And it’s not for us to complain about it. So you don’t hear complaints. But it is a — a truth, an actuality, that there is a weight to it.”

During the 2016 campaign, Michelle Obama was one of Hillary Clinton’s most visible supporters, including making a speech addressing Trump’s mistreatment of women that quickly went viral. But even the decision to take to the campaign trail isn’t something Obama takes lightly.

“You know, to have a candidate for the presidency speaking in such terms about women, as I said, was not — it was not a normal thing,” she explained. “So my response, you know, in light of what I was seeing from my female staff, what I was hearing from my daughters, their reaction to it, for me required a different kind of response … A lot of people had been shaken to their core. And still are. They are still feeling the reverberations of that kind of caustic language.”

As for the “when they go low, we go high” line that Obama’s supporters have made their mantra in the wake of the election, Barack’s wife said she wants people to go further: “I just want people to act on it. Not repeat it.”

Winfrey also asked Obama what she believed to be her biggest impact during her time at the White House. Obama’s work included the “Let’s Move” initiative to combat childhood obesity and the Joining Forces movement to support veterans, a partnership with the vice president’s wife, Jill Biden.

“One of the greatest things [is] when I see young women — particularly African American women, but young women generally — seeing somebody educated, strong, outspoken, just seeing that on a regular basis,” she said.