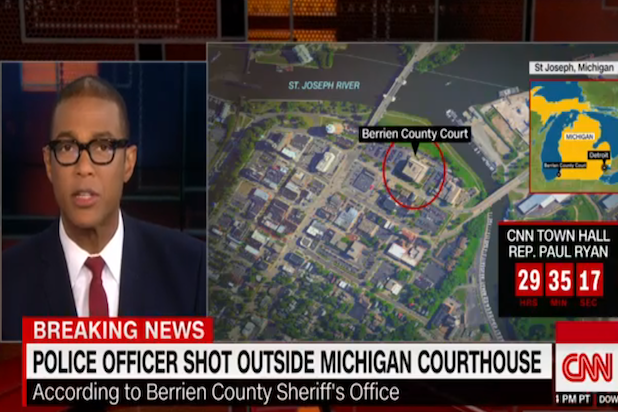 State Police have secured the scene at a Michigan courthouse where a shooting occurred on Monday, according to a tweet from Gov. Rick Snyder.

The shooting began around 2:25 p.m. local time and took place on the third floor of Berrien County Courthouse in St. Joseph, Michigan. CNN reported that two bailiffs and the gunman who shot them are dead.

Civilians at the courthouse “went for shelter once the shooting occurred and brave officers were able to come to the rescue and bring the shooter down,” Berrien County Sheriff Paul Bailey said during a press conference, adding that he felt “terrible” about the deaths.

Bailey said that a deputy sheriff and a civilian were also shot but are in stable condition at Lakeland Hospital.

“Please join me in praying for those affected. We will share more information here from MSP as it becomes available,” Snyder wrote in a second tweet.

Also Read: We Forget Mass Shootings in Less Than a Month. Here's the Proof

The shootings come less than a week after five police officers were killed in Dallas, Texas, during a peaceful march protesting the police killings this week of two African American men earlier in the week: Alton Sterling in Baton Rouge, Louisiana, and Philando Castile near St. Paul, Minnesota.

MSP has secured the scene at the Berrien County courthouse and started its investigation into the shooting that occurred this afternoon.

Please join me in praying for those affected. We will share more information here from MSP as it becomes available.