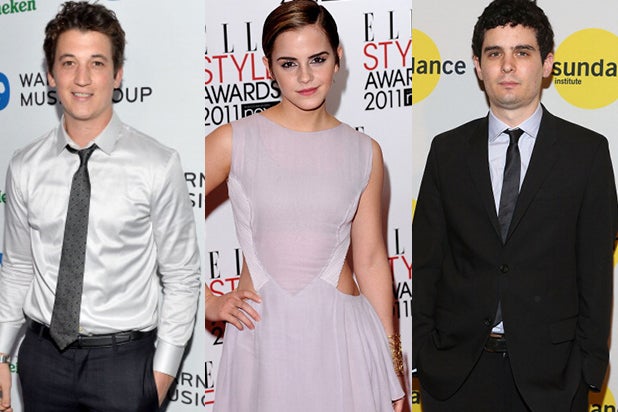 Four months after Damien Chazelle’s critically acclaimed drama “Whiplash” won the top prize at Sundance, Miles Teller is in early talks to reteam with the writer-director on the musical “La La Land,” with “Harry Potter” star Emma Watson in talks for the female lead, multiple individuals familiar with the Lionsgate project told TheWrap.

“La La Land” is a two-hander that follows a pair of dreamers — aspiring actress Mia, who’s lonely desperate to fit in, and cocky yet charismatic jazz pianist Sebastian — who fall in love in Los Angeles. However, the city that brought them together may tear them apart, as they soon discover that balancing love and art in such a cutthroat climate isn’t easy.

Jordan Horowitz (“The Kids Are All Right”) will produce for Gilbert Films, while Fred Berger will produce for his own Impostor Pictures. Lionsgate will distribute the movie, which was packaged by WME Global. The film is also expected to find Chazelle reuniting with his go-to composer Justin Hurwitz (“Whiplash”).

A song-and-dance romance, “La La Land” bills itself as a movie about big dreams, the big city and the kind of love that makes life feel like a musical.

TheWrap obtained Chazelle’s “lookbook” for “La La Land” — a document that helps describe the story, characters, look and tone of the film — and found the Director’s Statement to be quite compelling.

“I’d like to make a contemporary musical about L.A., starting with the L.A. we know but slowly building to a vision of the city as romantic metropolis–one that is actually worthy of the dreams it inspires. I’d like to make a musical about the way L.A.’s peculiar rhythms can push its residents to the edge of their emotions–be they hope, desperation or love. Think the kind of teetering-toward-madness you see in “The Graduate” or “Boogie Nights”, and imagine if you were to push that further. In this case, the city pushes its residents all the way: it pushes them into song.

The characters of this movie are just people trying to make it. One thing most movies about struggling L.A. actors and musicians miss is the poetry of their struggle: these are blue-collar folks working day in and day out to make something happen. What I’m interested in is pitting their yearnings and their ambitions against the musical genre. After all, musicals are all about the push-and-pull between reality and fantasy; the heroes of this film, because of their big dreams, are constantly poised on that edge.

At its core, this is a movie about artists in love–and what it means to be an artist in love in arguably the most competitive city on the planet. How do you juggle the need to find success as an artist with the need to share oneself with another human being? And how do you do so in a place where every poster, every street corner and every sign remind you of the glories just beyond reach? L.A. is the “Dream Factory”, and to me there’s something swooningly romantic about that: all those unsung songs and unrealized ideas clouding the air. By casting an affectionate eye on a pair of young hopefuls, while aspiring to the kind of full-fledged romanticism you hardly ever see in today’s movies, I hope to capture the spirit of the city I now call home, and make a movie that feels both classical and urgent–and, yes, intrinsically L.A.”

Sony Pictures Classics acquired “Whiplash” at Sundance and will release the Jason Blum-produced film on Oct. 10. The drama stars Teller as a jazz drummer who clashes with his strict instructor, played by J.K. Simmons (HBO’s “Oz”), and both actors are already garnering awards buzz. The film won the grand jury prize and audience award at Sundance and was invited to screen as part of the Directors’ Fortnight lineup at Cannes.

Teller is a budding young movie star who is currently filming the lead role of Reed Richards, aka Mr. Fantastic, in Josh Trank’s “Fantastic Four” reboot. He’ll finish filming that superhero movie, as well as the “Divergent” sequel “Insurgent,” before he tackles the challenging role of Vinny Pazienza in the boxing movie “Bleed for This.” Should Teller’s deal close, he’d segue to “La La Land” in February 2015.

Teller broke out in John Cameron Mitchell’s drama “Rabbit Hole” and has been in high demand since his moving performance as a teenage alcoholic opposite Shailene Woodley in “The Spectacular Now.” In addition to “Whiplash,” he’ll soon be seen in CBS Films’ comedy “Get a Job” and the indie romantic comedy “Two Night Stand,” which co-stars Analiegh Tipton. He’s represented by CAA and attorney Chad Christopher.

Watson recently gave an impressive supporting performance in Darren Aronofsky‘s Biblical epic “Noah.” This reporter once wrote a regrettable article about Watson not being Aronofsky’s first choice to play Ila, and while that may have been true, she proved to be absolutely right for the role, going toe-to-toe with Oscar winner Russell Crowe. Best known for playing Hermione in the blockbuster “Harry Potter” series, Watson recently starred in Sofia Coppola’s “The Bling Ring” and will next be seen opposite Ethan Hawke in Alejandro Amenabar’s thriller “Regression.” She’s repped by WME and Markham, Froggatt and Irwin.

Chazelle made his directorial debut with the 2009 indie “Guy and Madeline on a Park Bench” and is credited with writing “The Last Exorcism Part II” and the Elijah Wood thriller “Grand Piano.” His first spec script, a kidnapping thriller titled “The Claim,” is also in development at Route One Films. He’s repped by WME, Exile Entertainment and attorney Don Steele.

Horowitz produced “The Kids Are All Right” and Matthew Weiner’s “Are You Here,” as well as the upcoming Civil War-era drama “The Keeping Room,” which stars Brit Marling, Hailee Steinfeld and Sam Worthington. Julia Hart wrote “The Keeping Room,” and Horowitz is also developing her comedy script “Miss Stevens,” which is expected to serve as the directorial debut of Ellen Page. Horowitz is in pre-production on the horror-comedy “Master Cleanse,” which will star Johnny Galecki, Chloe Sevigny and Anjelica Huston.