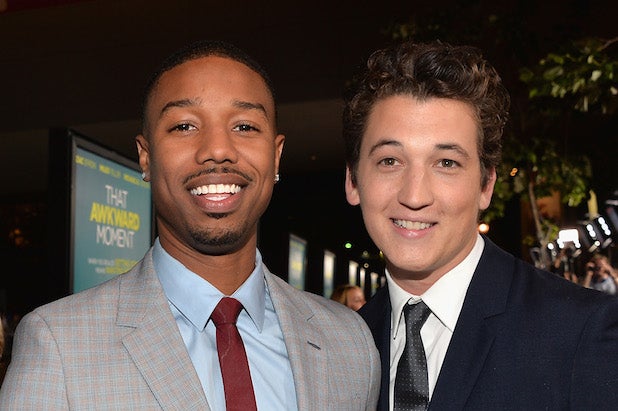 The team behind “That Awkward Moment” is getting back together again, as Miles Teller and Michael B. Jordan are attached to star in an untitled heist movie that Tom Gormican will direct and Scott Aversano will produce for Warner Bros., three individuals familiar with the project have told TheWrap.

Warner Bros. had no comment, while representatives for Teller and Jordan did not immediately respond to a request for comment.

Fresh off wrapping “Horrible Bosses 2,” Brett Ratner and John Cheng will also produce through RatPac Entertainment along with Aversano and his eponymous production company.

Also read: ‘That Awkward Moment’ Premiere: Michael B. Jordan Reveals His Most Awkward Encounter With a Fan (Video)

The film will be in the vein of fun capers like WB’s own “Ocean’s 11,” and it will be set in Macau, though plot details were not immediately available.

Warner Bros. executive Jesse Ehrman will oversee the project for the studio.

The project is mentioned in Gormican’s (pictured left) official bio on the website of Focus Features, which released “That Awkward Moment.” While the reunion has been brewing for several weeks, it was not announced around the time of “That Awkward Moment’s” release out of respect for star Zac Efron, who is not involved in the heist movie, according to an individual with knowledge of the situation.

Jordan and Teller are considered two of Hollywood’s hottest young stars and they may soon reteam for 20th Century Fox’s reboot of “Fantastic Four,” which is expected to start production this summer. Jordan is poised to play the Human Torch, while Teller has been the frontrunner to play Mr. Fantastic for the better part of a year, as TheWrap first reported.

Teller, who next stars in “Divergent” and the romantic comedy “Two Night Stand,” earned rave reviews for his performance as a bullied drummer in “Whiplash,” which took top honors at Sundance. He’s also attached to play boxer Vinny Pazienza in the indie drama “Bleed for This.” He’s repped by CAA and attorney Chad Christopher.

Jordan, who is coming off an acclaimed turn in “Fruitvale Station,” is attached to star in John Hillcoat’s crime movie “Triple Nine” and Ryan Coogler’s boxing movie “Creed,” in which “The Wire” alum would play the grandson of Rocky Balboa’s favorite opponent Apollo Creed. He’s repped by WME, the Schiff Company and attorney Gregory Slewett.

Gormican wrote and directed “That Awkward Moment” and co-produced the omnibus comedy “Movie 43.” He recently completed an adaptation of Emily Post’s book “Etiquette” for Warner Bros. and he also wrote the romance movie “Save the Date” for Sony and producer Neal Moritz. He’s repped by WME, 3 Arts Entertainment and attorney Michael Schenkman.

“That Awkward Moment” has grossed $22 million in the U.S. on a reported production budget of only $8 million. Efron’s international fanbase is expected to help make the romantic comedy a hit on home video.