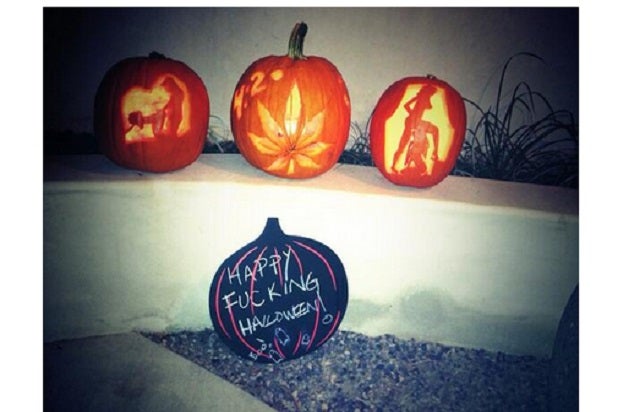 Miley Cyrus will surely scare up some more controversy with a Halloween message she posted early Wednesday morning.

The “Wrecking Ball” singer, who raised eyebrows and outrage with her lascivious performance at this year’s Video Music Awards, has once again shared a bawdy image with the world, this time via her Twitter account.

Two of the pumpkins are carved to depict people engaged in sexual activity, while the third features a marijuana leaf with the stoner mantra “420.”

In case that wasn’t enough to stir the ire of the easily offended, the photo also contains a pumpkin-shaped decoration bearing the message, “Happy Fucking Halloween!”

It’s unclear whether the pumpkins are actually Cyrus’ jack-o’-lanterns, or if she found the photo elsewhere and was so tickled by the profane image that she decided to tweet it.