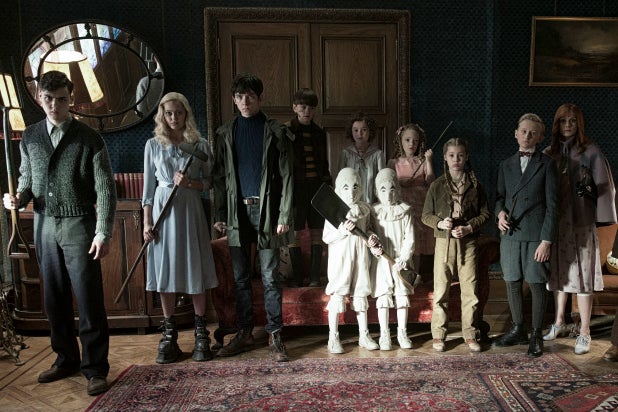 The very title “Miss Peregrine’s Home for Peculiar Children” conjures a delightfully eccentric cross between Edward Gorey and the X-Men, and there was a time when one could expect that director Tim Burton would know exactly what to do with this sort of material.

The film offers the occasional flash of delectable weirdness from the man who once gave us “Beetlejuice” and “Pee-wee’s Big Adventure,” but for most of its seemingly interminable running time, “Miss Peregrine’s” has all the breeziness and joy of wading through aspic. Working from a screenplay by Jane Goldman (“Kingsman: The Secret Service”), adapting the novel by Ransom Riggs, this film offers far too many scenes of characters explaining the plot — or worse, very deliberately not explaining it, simply to set up some unsurprising late-in-the-game reveals.

We begin in Florida, where Jake (Asa Butterfield, “Ender’s Game”) has a close relationship with his grandfather Abe (Terence Stamp); throughout the boy’s life, Abe has told him stories about the children’s home on an island off the coast of Wales where he lived after Abe’s parents escaped Poland. It was a literally magical place, where other children were invisible, or so defiant of gravity that they had to wear lead shoes, or in possession of other “peculiarities.”

Jake’s parents (Chris O’Dowd and a barely-utilized Kim Dickens) dismiss these tales as fabrications, but the night that Abe dies, he tells Jake to go back to the island and find the home. After some prodding by Jake’s grief counselor (Allison Janney), Jake and his father cross the ocean. The home appears to be in ruins after it was bombed by the Germans in 1943, but then Jake sees the floating Emma (Ella Purnell, “Maleficent”), firestarter Olive (Lauren McCrostie) and all the other children from Abe’s stories.

None of them have aged because Miss Peregrine (Eva Green) is an ymbrine, which gives her two abilities: the power to turn into a bird and the ability to manipulate time. She has kept the home and its residents living in a permanent loop of the 24 hours before that bomb drops, so when Jake steps inside, it’s still 1943. There are of course, some nasty Big Bads out there led by Barron (Samuel L. Jackson) because something something take over the world.

On paper, “Miss Peregrine’s Home for Peculiar Children” sounds like the perfect vehicle for director Burton — but then so did “Dark Shadows.” Like that ponderous adaptation of the gothic soap opera, this movie has all the shadowy trappings and sepia-toned creepiness that any fan of the “American Horror Story” ad campaign could want, but it’s sorely in need of a soul.

Jake, as played by Butterfield, comes off as a complete blank, and none of the peculiar children get enough time to establish themselves as anything besides their mutant power. (Even Dame Judi Dench is ill used here, turning up for about three scenes and playing a character who winds up being completely extraneous to the plot.)

There are some gloriously Burton-esque visuals, including an adorable little girl with a hungry jaw in the back of her head, a character who uses lung-power to displace the water in a sunken ship, and some CG stop-motion battles involving reanimated dolls and skeletons. For the most part, however, “Miss Peregrine’s” merely underscores that this visionary director all too often loses the thread when it comes to turning designs and storyboards into an actual movie.

This adventure should have been spooky and witty and exciting, but instead it’s just dreary and dull. Peculiarity has rarely been this tedious.