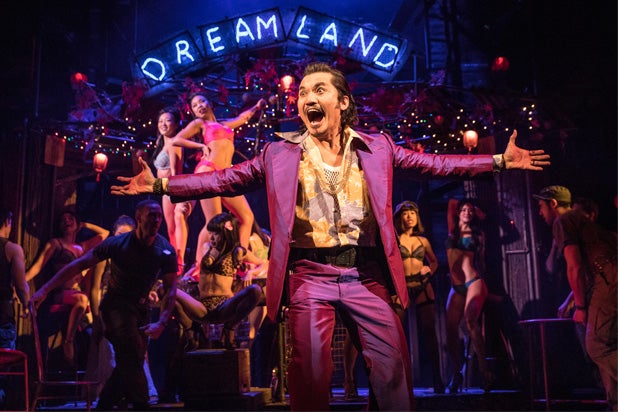 Claude-Michel Schonberg and Alain Boublil have a lot to answer for. Under the umbrella of producer Cameron Mackintosh, their back-to-back hits “Les Miserables” and “Miss Saigon” were part of the British invasion that filled a creative void in the 1980s and ’90s when AIDS devastated the Broadway theater community.

Those musicals brought anthem-itis to these shores, and popularized the sung-through musical in all its serious dreariness while providing none of opera’s glorious grandeur. Stephen Sondheim once said that recitative is like pouring molasses over a score. Great opera composers have known how to distinguish their breakout arias from the sung speech encircling them. But not Schonberg and Boublil.

A new revival of “Miss Saigon” opened Thursday at the Broadway Theatre, and once again the music is merely loud when it needs to be affecting. No ballad is allowed to be sung pianissimo or mezza voce for more than a few bars before being inflated into a huge anthem on thwarted love and/or political tyranny.

“Miss Saigon” updates “Madama Butterfly” to the Vietnam War and the fall of Saigon. But in place of Puccini’s Humming Chorus we get the roaring rotary blades of a helicopter landing in front of the American embassy. This famous set piece has all the emotional thrill of several express trains barreling through the subway while you stand there stuck, waiting for the local.

Other big production numbers include communist military parades in honor of Ho Chi Minh. Rather than giving us an impression of the repressive regime, director Laurence Connor and choreographer Bob Avian turn these songs into typical Broadway showstoppers. We’re supposed to be impressed by the marching in unison, the twirling flags, the pointed guns, and the fascist art of scenic designers Dotie Driver and Matt Kinley.

Only marginally less bombastic is the music given to the Vietnamese heroine, Kim (Eva Noblezada), and her callow American lover, Chris (Alistair Brammer). Relief does come late in the show with “The American Dream,” the 11 o’clock number delivered by an every-hustling pimp called the Engineer (the braying Jon Jon Briones). If only the songwriters had recycled more from Kander and Ebb. 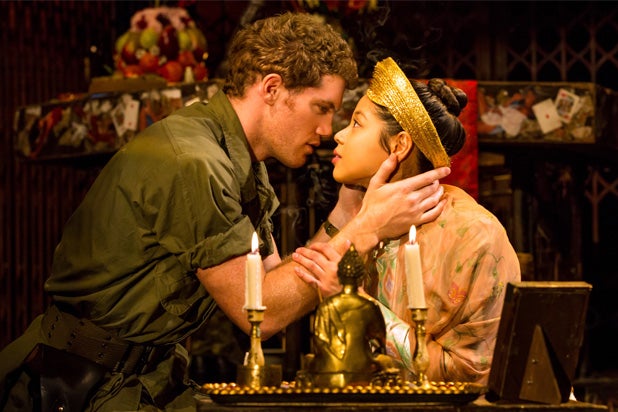 The lyrics by Boublil and Richard Matlby Jr. can be summed up in their creation of a character named John (Nicholas Christopher). He isn’t named Bruce because Bruce doesn’t rhyme with Saigon.

Puccini rewrote “Madama Buttterfly,” after a disastrous premiere at La Scala in 1904, and in the process made the Lieutenant Pinkerton character more sympathetic. Schonberg and Boublil go much further with the lieutenant’s counterpart, Chris, putting him through so many moral debates with his Caucasian wife (Katie Rose Clarke) that the unusually empathetic Brammer deserves a Tony for not ending up a pretzel.

In one respect, “Miss Saigon” honors its source material with utter fidelity. Kim commits suicide with her child standing nearby. In her sweet, generic approach to the character, Noblezada doesn’t suggest this dark, vengeful streak in the character. But then again, neither do the sopranos singing Cio-Cio-san at the Metropolitan Opera.