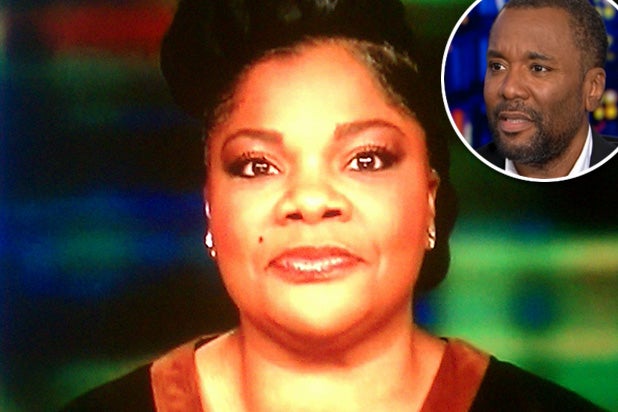 Mo’Nique is speaking out and taking issue with comments made by “Precious” director Lee Daniels, who said the Oscar-winning actress fell from grace in Hollywood for making unreasonable demands.

Daniels comments essentially confirmed reports that was “blackballed” following her Best Supporting Actress Oscar for the 2009 drama. But in an interview Thursday with Don Lemon on “CNN Tonight,” the actress insisted she was offered parts in other movies, “they just didn’t make sense to me,” she said.

“It wasn’t that I was blackballed like Mr. Daniels said… the phone was ringing and the scripts were coming but the offers that were associated with them made me say ‘I can’t accept that,’” she explained, adding that taking such offers would have sent a negative message to other African-American women.

“If we continue to accept these low offers, how do we make a change?” she asked.

During her interview, a clip was played of “Empire” creator Daniels’ appearance on CNN the previous night. In that interview, Daniels told Lemon that Mo’Nique hadn’t “played ball” and didn’t understand the business of Hollywood — which ultimately caused her to fade from the spotlight.

“I think that there were demands that were made on the ‘Precious’ campaign that everyone knows hurt her. I told her that,” said the director. “You’ve gotta play ball. This is not just show — it is show business.”

told Lemon she watched Daniels’ interview on television and was stunned by what he said. “It shocked me… I was yelling at the screen, ‘Don, please ask him what the demands were!'”

She continued, “There were no demands, there was a request from the movie studio that I fly to France for the Cannes Film Festival. I simply said, ‘I respectfully decline.'”

She explained that she was busy working on her late-night talk show on BET and had additional responsibilities as “a wife and a mommy.”

“I had a couple of days downtime and I wanted to spend that with my husband and my kids,” she said. However, said the studio [Lionsgate] continued to pressure her with an offer to upgrade her hotel in France, but again she declined. When the third call came asking: “What is it going to take to get Mo’Nique to the Cannes Film Festival?” her husband, who served as her manager, asked: “Is there a number associated with it?”

According to the actress, the studio responded that it would never pay for anyone to do promotional work for a movie, and pointed out that she only received $50,000 for her role in “Precious.” She also hinted that perhaps there should have been compensation offered for travel to promote the movie.

“It really wasn’t about the money and I am not complaining because I signed up to do it with my friend [Daniels],” she said, appearing to choose her words cautiously. “When the movie studio said we can’t pay you to do this, we didn’t have a problem with that.”

But that’s when trouble started brewing and reports came out that she was being “demanding and difficult,” she said.

As for Daniels’ evaluation of her actions at the time, he told Lemon on Wednesday night: “Sometimes artists get in their own way.”

Rather than a big studio movie, said she is now focusing on independent films, and will next appear in the indie drama “Blackbird,” which co-stars Isaiah Washington and is directed by Patrik Ian Polk. “When we got it, we knew it was necessary we get involved, to have ownership of it and to tell this personal story,” she said of the film.