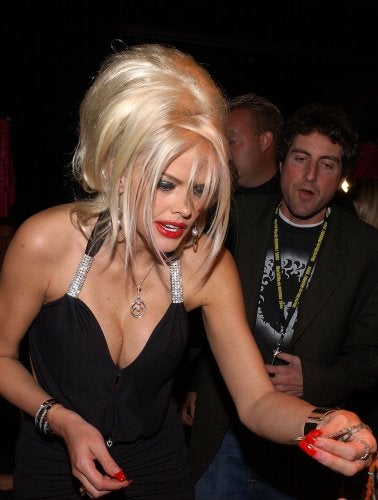 Another day, another hearing filled with stories featuring Anna Nicole Smith as a sleeping beauty who barfed and shat upon herself while lying semi-comatose for days at a time in bed.

The state cop didn’t witness Smith’s slumber habits himself, but read aloud from his recent interrogation of one of Smith’s $7-an-hour nannies.

Nadine Alexie, who worked for Smith in the model’s Bahamian home for three months in 2006, told Santiago and other investigators that Smith’s lawyer-companion, Howard K. Stern, and her shrink, Dr. Khristine Eroshevich, kept Smith in a zombie-like state with round-robins of downers and opiates.

Sometimes, Alexie said, Smith would lie asleep and unfed for three days running, during which she would involuntarily relieve herself in bed; when she awoke, she would often vomit on her sheets.

Once awake, Smith “wobbled” about her home in a stupor.

“Oh, she fell a lot of times,” Alexie told her interrogators. “Basically, each time she woke up after being asleep a couple of days.”

The nanny said that whenever Smith had visitors or was about to tape a TV spot at home, she’d stay off her meds and return to normalcy. Once company had departed, however, Stern and Eroshevich plied Smith with drugs and sent her back to dreamland.

Alexie described a ritual during which Stern and/or Eroshevich would lead her into a bathroom to sedate her every four hours – when Smith wasn’t simply “knocked out.” One of Alexie’s clean-up duties involved scooping up the bloodied syringes or flame-blackened spoons left behind in the bathrooms.

Alexie estimated that Smith was “normal” only about 10 to 15 percent of the time she worked for her. She also described how Dr. Eroshevich, a psychiatrist, tried to become a quick study in “pain management” by reading up on the subject while visiting Smith’s home.

The nanny claims that Smith trusted Eroshevich and took her meds whenever the shrink said to, but “many times told Howard to get out of her life” and resisted his instructions to consume the staggering array of pharmaceuticals that were prescribed for her.

Much of the morning was spent with prosecutors and defense lawyers fighting over which parts of the interrogation transcript would be admitted into evidence. Even when this had been hashed out, Renee Rose continually objected to attempts by Stern’s attorney, Steven Sadow, to quote affidavits, made while Smith was alive, in which no mention was made of syringes or needles in her home.

Judge Robert Perry told the Deputy D.A. he was allowing the defense a little extra latitude in the matter, as Sadow glared murderously at Rose.

“I’m going to be fought tooth and nail,” Sadow predicted as he continued his cross-examination of Santiago. In this he was clairvoyant.