Morris is a 13-year-old boy stuck in a difficult situation: His widower father has moved the two-person family to a strange new town in pursuit of work, leaving Morris to navigate tricky foreign waters largely on his own while dad is busy at work. Yet as strained as the relationship between Morris and his father may be, their ties become a skein that keeps the coming-of-age tale “Morris From America” together.

Writer-director Chad Hartigan (“This Is Martin Bonner”) differentiates this bildungsroman with a few notable elements. As Curtis, Morris’s father, Craig Robinson delivers a quietly excellent dramatic turn. His character’s job takes Curtis and Morris not to some backwater American burg but to Heidelberg, Germany. There, Morris appears to be the only black kid in an otherwise very homogeneous community. The young man, now a total outsider, finds solace in memories of New York and the sounds of hip-hop, which feed his desire to be an MC.

Morris is heavy-set and socially uncertain, further setting him apart from a crop of local kids with whom he spends the summer at a youth activity center. Curtis works as a soccer coach, but his team doesn’t have the distinction of a winning record, giving other kids one more weapon to use against Morris. Even with the kind and patient attention of a grad student German tutor (Carla Juri), Morris feels like he’s on his own.

As he hangs around the margins of the youth center, newly adolescent Morris is easy prey for TV-ready 15-year old Katrin (Lina Keller). She enchants him with flirtatious glances; the kid has no chance. Katrin and Morris don’t exactly date, but her attentions may represent more than a crass attempt at teenage rebellion. 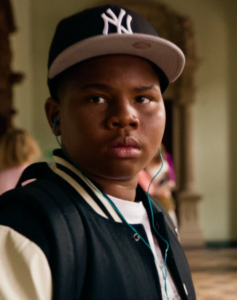 Hartigan allows Morris to be played as the teen hopes for a hookup with Katrin, but he never tries to sucker us into expecting some unrealistic or clichéd result. He lets the characters move at their own pace, following their evolving friendship through episodic encounters and minor betrayals, until they find their own meeting ground.

For all the “stranger in a strange land” ennui, the true throughline in “Morris From America” is the boy’s relationship with his father. This rare dramatic performance from Craig Robinson stokes a desire to see the actor given chances like this more often. Robinson lets us see Curtis straining against his own loneliness as he tries to prioritize his son’s interests.

Hartigan orchestrates a scene — on paper, a simple father-son talk during a car ride — in which Robinson can reveal the degree to which Curtis and Morris face the same challenges, as well as the degree to which they’re compounded for the older man. Robinson plays the scene so well that it locks the entire movie into place.

Around the dual relationships Morris explores with Katrin and his father are minor snapshot scenarios to embellish the story. Morris tries to find his place in Germany; his tutor attempts to give him tools to survive; and Katrin wrestles with her own romantic interests. “Morris From America” isn’t interested in exploring every dramatic avenue indicated by these moments, but the aggregate effect captures the rhythm of summer in a new town. We’ve seen many of these elements often, in similar configurations, but Hartigan makes them feel specific to this story.

The script nestles important kernels of information in these small moments. Given a cassette tape of his father’s own teen MC experiments, Morris scorns dad’s embarrassing flow in a well-tuned comic moment. But the tape also serves as a reminder that Morris is living the same difficult days his father faced decades earlier, deepening their connection.

“Morris From America” shines a deserved spotlight on Markees Christmas, who will hopefully be given more opportunities to command the screen, and it allows Craig Robinson a framework in which to deliver a career-best performance. Any familiarity in the story recedes into the background as the characters grow, and Morris finds his voice.