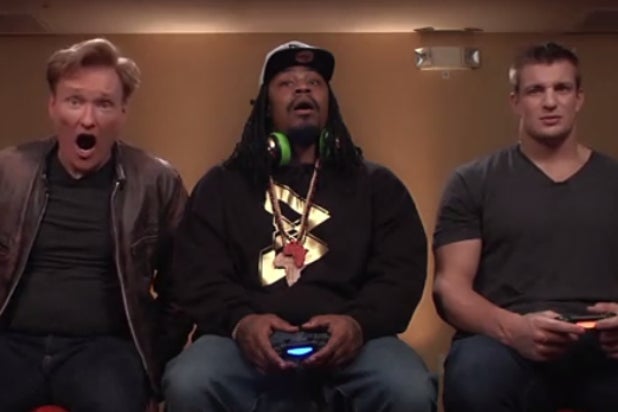 The two NFLers battled to the (extremely gruesome) death on the unreleased violent video game for TBS’s Thursday night “Conan,” and yes, the notoriously camera and media-shy Lynch actually spoke quite freely. As a matter of fact, he was rather charming and funny — when the running back wasn’t brutally murdering his newfound friends, that is.

But at one point, when Gronk’s character slices the guts out of Lynch’s, the man known for entering “Beast Mode” had to walk away. If readers find that reaction over-the-top, just wait until the later on-screen, girl-on-girl crotch punch gets all three of them out of their seats.

The next-gen game — and the “Clueless Gamer” installation itself — get pretty creepy at some points and disturbingly grotesque at others. Eventually, O’Brien had to lay down on the floor in the fetal position, becoming Lynch’s “bitch” in the process.

Later, the football players drop the joysticks and grab the pigskin to impart the virtues of grabbing one’s testicles in all situations, not just when scoring touchdowns. Then Gronk takes it way further with a severed head trophy. You’ll just have to watch.