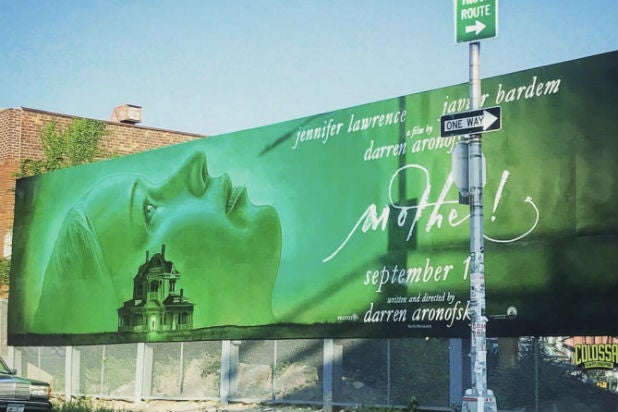 There’s an old joke about Sigmund Freud: If it’s not one thing, it’s your mother. If only Darren Aronfsky’s “mother!” were as easy to explain.

The film, which obsessed critics at film festivals, has bewildered actual Americans — or at least, many of the few who have gone to see the box-office dud. Despite starring A-lister Jennifer Lawrence, the film earned an F from moviegoers on Cinemascore and only made $7.5 million on a $30 million budget this opening weekend.

They might not have been so disappointed if the film, and its studio, Paramount, could have braced Americans over what to expect. (That lower-cased “m” and exclamation point in the title may have been the least of its problems.)

TheWrap spoke to experts and studio insiders about the daunting task of marketing a mystery-shrouded thriller that seems more intended as allegory than a straight story. Here’s what they told us.

For a Lawrence project, the film offered next to nothing in the way of synopsis. Audiences got a hint that “mother!” would be a horror-thriller in March, when Paramount Domestic Distribution Chief Kyle Davies said Aronofsky would bring “thrills and chills” on the film’s original Halloween release date.

Over the summer, the studio yanked the project up the release schedule for a mid-September opening, where only days prior it had played the fall film festival circuit. Audiences who went to see it in theaters were surprised that the film wasn’t a horror movie, but rather a deeply symbolic, film student’s wet dream.

In an interview with IndieWire’s Anne Thompson, Aronofsky complained of “how quickly information flows and how hard it is to stay in the conversation.” He met the challenge with silence rather than information.

Aronofsky then defended Paramount’s decision to rush out a the wide release (more on that in a second), saying the studio team “saw September as lighter because the summer was weak.”

Aronofsky refused to talk about the film until it premiered at the Toronto Film Festival earlier this month. According to IndieWire, Aronofsky demanded that the studio not reveal too much about the film in the trailers to keep “the mystery alive.”

“Any time you have a director who is running point on marketing, [it] is not the easiest way to get through a film,” said Russell Schwartz, a professor of entertainment marketing at Chapman University and a marketing veteran at studios like New Line and Relativity Media.

“That’s not to say that directors don’t bring great insight in terms of the marketing process, and that’s not to say that directors shouldn’t be listened to. It’s a tricky one … It’s kind of like Steven Soderbergh, who abides by the ‘one for them, one for me’ rule. ‘mother!’ was less commercial and more personal for Aronofsky. By supporting him the way they did, they had this confidence, and I wouldn’t be surprised if this relationship will continue,” Schwartz added.

It’s common that a director of Aronofsky’s status has ideas on how his film should be promoted, and the studio is often obliged to listen, one individual close to the strategy said.

Paramount has no regrets, one insider close to the strategy said.

“There was was never any pretense that ‘mother!’ was anything less than a wholly unique film for the studio and for audiences,” the individual told TheWrap.

In Uncharted Territory, They Still Marketed a Horror Film

Although the film was clouded in secrecy, the first poster revealed Jennifer Lawrence with her heart torn out. Horrific? Check, and it set a tone. A subsequent poster featuring Javier Bardem’s character was engulfed in flames. Yet another poster was almost a dead ringer for the one-sheet of the 1968 horror classic “Rosemary’s Baby,” which led some to believe the plots might be similar. 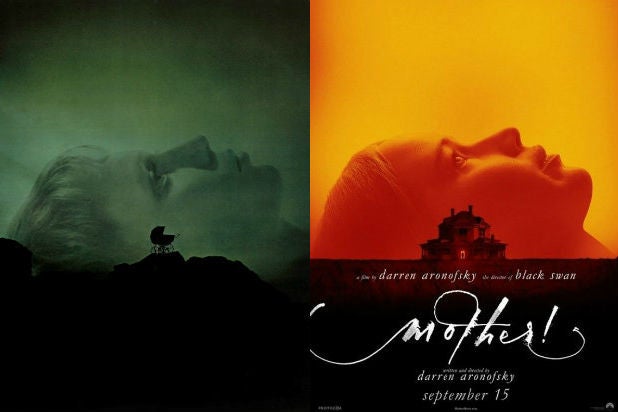 Also, the studio offered only one vague synopsis: “A couple’s relationship is tested when uninvited guests arrive at their home, disrupting their tranquil existence.”

“They were trying to find a narrative for the movie and it probably was not a wrong idea to start it as a thriller. When that wasn’t tracking, you sort of change and try to go for — for lack of a better phrase — a lower common denominator, which would be a horror film,” added Schwartz.

“And I think people came in expecting that and were disappointed because that’s not really what it is. When you are marketing a movie, you have to make it simple and quick,” he continued. “Maybe Darren should’ve started a dialogue about his movie earlier — it seemed like they were playing catch up. When the movie wasn’t resonating with from the materials, he then got on board and started talking about it.”

Many trailers are criticized for revealing too much plot. But the teaser for “mother!” may not have showed enough. The first trailer for the film was only audio of Lawrence and Bardem played over a black screen.

“There’s a sense Paramount tried to fool audiences that this might have been a commercial horror film. It’s an upscale, art-house psychological thriller, which does not play in the South or the Midwest,” one top exec at a rival company told TheWrap.

“Also, who could’ve ever thought ‘It’ would be a $300 million movie? Here comes Paramount with the Darren Aronofsky art movie and a crazy clown takes all their money,” the executive said.

Why Not a Limited Release?

A movie like “mother!” might have fared better with an opening in limited release, which would have let word- of-mouth build among those who appreciate the film. But Paramount opened it in a whopping 2,368 theaters in its first weekend.

“I’m sure they did consider [starting in limited],” Schwartz said, adding that if he had been in charge of the film’s marketing, he “would’ve looked at a slower release. However, that’s just not what Paramount does. That’s not their game. Would the film have opened different if it had gone through an independent company? I don’t know.”

If you recall, Aronofsky’s 2010 film “Black Swan” had a slow burn — it started in 18 theaters and gradually added more theaters, earning around $106.9 million in its first four months.

Also, if Aronofsky and Paramount failed to predict the massive success of “It,” they weren’t alone. The horror film opened a week ahead of “mother!” and told a much more traditional horror story. It scratched an itch “mother!” doesn’t.

Paramount says it doesn’t care what anyone thinks — because the conversation about “mother!” is something you can’t buy or sell.

“This movie is very audacious and brave. You are talking about a director at the top of his game, and an actress at the top her game. They made a movie that was intended to be bold,” Paramount President of Worldwide Distribution and Marketing Megan Colligan told The Hollywood Reporter on Sunday.

“Everyone wants original filmmaking, and everyone celebrates Netflix when they tell a story no one else wants to tell. This is our version. We don’t want all movies to be safe. And it’s OK if some people don’t like it,” she concluded.