Ever since the announcement of the iPhone 4 with video recording and editing capabilities, it was just a matter of time before somebody made a movie on the device.

“Apple of My Eye,” a 88-second short in which a young girl and her grandfather look at model trains, appears to be the first – or, at least, the first to receive exposure online.

Filmmakers Michael Koerbel and Anna Elizabeth James filmed scenes by mounting the iPhone on the front of a remote-controlled model train, on a makeshift dolly, a tripod and a small crane.  James did the editing using Apple’s iMovie software, which is included on the new iPhones. 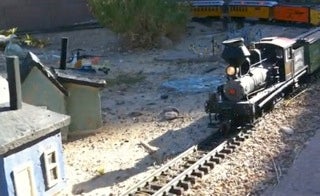 The short is available here, and a behind-the-scenes featurette is here.

Around the same time that "Apple of My Eye" appeared online, Colorado Springs filmmaker Seth Schaeffer posted footage of the annual Pikes Peak International Hill Climb, which he also shot using the iPhone.  Schaeffer’s film, however, was not edited on the device.