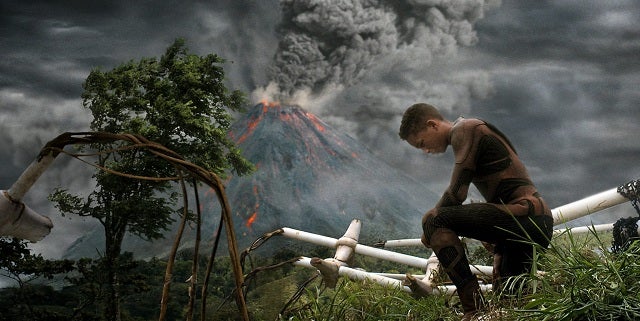 “After Earth,” the Will and Jaden Smith sci-fi adventure that has failed to take off in the U.S., is showing signs of life at the overseas box office, where it finished No. 1 for the weekend.

That’s better than the same-territory openings of “The Last  Airbender” at $42.7 million and “The Karate Kid” with $32.3 million. The latter of those two, which starred Jaden Smith, earned more than $180 million overseas in 2010. “The Last Airbender,” which was directed by “After Earth” director M. Night Shyamalan, brought in more than $187 million.

Distributor Sony is hoping "After Earth,” in which the father and son play space travelers stranded on Earth 1,000 years after humanity has left, can score overseas. The film, which has a hefty $130 million production budget, debuted to a weak $27 million domestically last week. After taking in $11.2 million in North America this weekend, its global total stands is just over $95 million. Finishing just behind “After Earth” was Universal’s “Fast & Furious 6,” which brought in $45.3 million from 63 markets in its third week. That raises its international haul to $381.7 million and its global total to a $584.6 million.

Also read: Independent Box Office: Joss Whedon's 'Much Ado About Nothing' a Record-Breaker

“Fast 6” has already out-grossed the lifetime foreign totals of the franchise’s first four films, and is on track to pass “Fast 5,” which took in $416 million abroad, next weekend. It opens in two weeks in Venezuela, in Japan on July 6 and in China in July.

With $17.6 million from 53 foreign markets this weekend, Paramount's "Star Trek Into Darkness" has hit $176 internationally, already outpacing the lifetime gross of the last "Trek" movie by 40% with a number of territories left to release, including Japan, France, Italy, Spain and Brazil. Its worldwide total is $376.5 million.