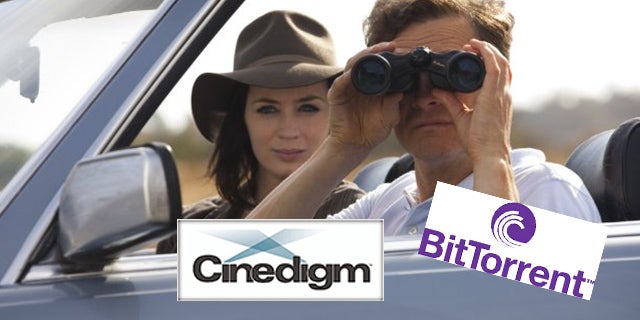 Hollywood studios are furious that BitTorrent, synonymous in the movie industry with piracy, has partnered with independent studio Cinedigm to promote "Arthur Newman," TheWrap has learned.

"It's a deal with the devil," one studio executive told TheWrap. "Cinedigm is being used as their pawn."

Cinedigm announced this weekend that it would offer the first seven minutes of the Emily Blunt-Colin Firth indie "Arthur Newman" exclusively to BitTorrent users, which number up to 170 million people.

The technology maker enables users to send large data files over the internet, and has been associated for a decade with copyright infringement. The Pirate Bay, a BitTorrent user, was raided by Swedish police in 2006 based on allegations by the Motion Picture Association of copyright infringement. According to one tally, some 200,000 people have been sued between 2010 and 2012 for uploading and downloading copyrighted content through BitTorrent.

Hollywood studios have spent years and many millions of dollars to protect their intellectual property and worry that by teaming up with BitTorrent, Cinedigm has embraced a company that imperils the financial underpinnings of the film business and should be kept at arm's length.

"It's great for BitTorrent and disingenuous of Cinedigm," said the executive. "The fact of the matter is BitTorrent is in it for themselves, they're not in it for the health of the industry."

Other executives including at Warner Brothers and Sony echoed those comments, fretting that Cinedigm had unwittingly opened a Pandora's box in a bid to get attention for its low-budget release.

Unsurprisingly, BitTorrent rejects the characterization that it is an enemy of the entertainment industry or a purveyor of pirated content. Matt Mason, BitTorrent's vice president of marketing, told TheWrap the company is in the business of providing technology that enables users to move large files. He stressed that like a manufacturer of MP3s or VHS tapes, it has little role in deciding what kinds of content its peer-to-peer file sharing system is used for.

Also read: BitTorrent to Hollywood: We're Not Pirates – We Come in Peace

He said that the 170 million people who use its official software are primarily interested in accessing legitimate and legal sources of content, which should encourage studios to find ways to work with the company.

That massive user base is what appealed to Cinedigm when it agreed to offer the first seven minutes of "Arthur Newman" exclusively to BitTorrent users.

"Blaming BitTorrent for piracy is like blaming a freeway for drunk drivers, " Jill Calcaterra, Cinedigm's chief marketing officer said. "How people use it can be positive for the industry or it can hurt the industry. We want it help us make this indie film successful."

She said that the response has phenomenal. Since the footage was released Monday, Calcaterra said the sneak peek has generated hundreds of thousands of downloads. "Arthur Newman" stars Colin Firth and Emily Blunt and hits theaters on Friday. Cinedigm plans to do six more promotions with BitTorrent this year,

Mason said the company is meeting with studios to change their negative perceptions.

He noted there was still a lot of resentment within the industry to a service that has provided the technological means for sites with a loose respect for copyright like The Pirate Bay to spring up.

"We'll be working with all of [the studios] one day," Mason said. "It's really up to them how quickly they come to the table and realize we're not the villain, we're the heroes."

That day may be a little farther off than Mason would like.

"I really missed them being at the forefront of the piracy issue," the studio executive said. "I don't remember them going, 'Naughty, naughty, don't use our technology for that.' They don’t give a shit."