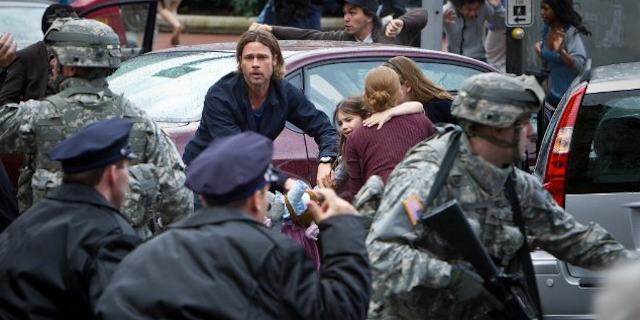 Incomplete script, an incoherent ending, massive re-shoots, millions of dollars in budget overages, and even a Hungarian SWAT team raid are apparently just a few of the issues plaguing Pitt's troubled production, according to Vanity Fair's June cover story.

According to "Lost" writer Lindelof, who rewrote the film's third act and spoke with VF contributor Laura M. Holson, the SWAT team was the least of the producing team's worries. After screening a first cut of Marc Forster's geopolitical zombie thriller, Lindelof said the ending was abrupt and incoherent.

"It was, like, wow. The ending of our movie doesn't work," Evans recalled after watching a director's cut of the blockbuster hopeful. "I believed in that moment we needed to reshoot the movie."

So Lindelof gave them two options — or "roads," rather — to fix the disasterous adaptation of Max Brooks' novel of the same name.

"I said to them, 'There are two roads to go down here.' Is there material that can be written to make that stuff work better? To have it make sense? To have it have emotional stakes? And plot logic and all that? And Road Two, which I think is the long-shot road, is that everything changes after Brad leaves Israel."

The film follow's Pitt's character, a United Nations bureaucrat, tasked with finding a way to stop a zombie pandemic from decimating all of humanity. Lindelof's plan B (also the name of Pitt's production company) required cutting a 12-minute battle in Russia and crafting a new ending, instead.

"I didn’t think anyone was going to say, 'Let's throw it out and try something else,'" Lindelof continued to recall. "So when I gave them those two roads and they sounded more interested in Road B. I was like, 'To be honest with you, good luck selling that to Paramount.'"

But the extra money to shoot an additional 30-40 minutes of footage in order to make a new ending make sense was not the only expense that Paramount is blaming for the budget ballooning to somewhere around $200 million.

The wrap-up crew closing down production in Malta found forgotten purchase orders for cast and extras that totaled in the millions. Evans called the overages an "unthinkable action."

“It was literally insane," Evans said. "Adam and I believed we’d gotten out of Malta good, and I found out we weren’t. That is a nightmare.”

Holson reveals the rest of the real-life nightmare of creating what was supposed to be a fictional nightmare in the June issue of Vanity Fair, hitting newstands before "World War Z" invades theaters on June 21.