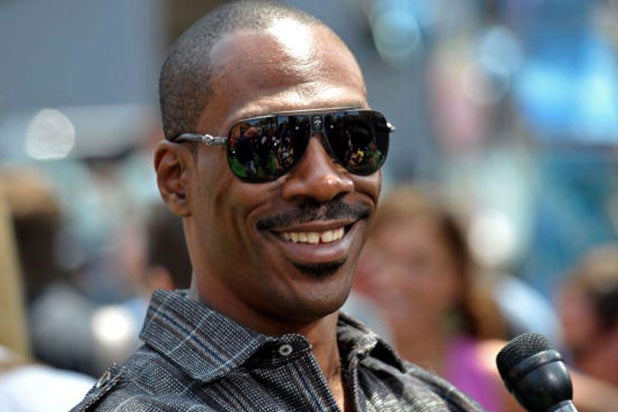 Following his second-place finish behind Drew Barrymore in 2011, Forbes has declared Eddie Murphy to be the most overpaid actor in Hollywood.

After a long comedy career led him to box office successes in “Beverly Hills Cop,” “The Nutty Professor,” and “Shrek” — as well as an Oscar nomination for his performance in 2006’s “Dreamgirls” — the “Saturday Night Live” alum’s career has taken a dive.

Based on his last three releases’ total haul in theaters and the paychecks he’s received, the business magazine has determined that for every buck he was paid, it resulted in just $2.30 at the box office.

The estimate isn’t hard to believe when you recall his last three major movies. “Imagine That” in 2009 sold just over $16 million worth of tickets on an estimated budget of $55 million. “Tower Heist” is his most notable hit of late, but it only grossed $78 million domestically, while the budget was $75 million. “A Thousand Words” managed $18.4 million in the United States, but cost the studio $40 million.

Things are looking up for Murphy though. He’s executive producing a “Beverly Hills Cop” series for CBS. He’s also Universal Pictures’ first pick to co-star with Arnold Schwarzenegger and Danny DeVito in “Triplets,” a sequel to “Twins.”

And he’s certainly not the only notable actor Forbes says isn’t worth his fee. Katherine Heigl — the star of flops like “Killers” and “One for the Money” — is the number two most overpaid actress on the top ten list because she only earned her employers an average of $3.40 for every dollar they spent on her. Thanks to the poor performance of “How Do You Know” and “This Means War,” Reese Witherspoon came in third. For every dollar she earned, her last three films only netted an average of $3.90.

Here is Forbes’ full list of Hollywood’s Most Overpaid Stars: