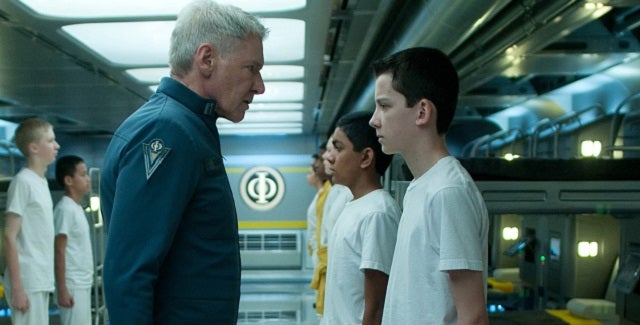 The sci-fi action movie “Ender’s Game” isn’t out until Nov. 1, but it’s already the target of an organized boycott.

The group Geeks Out has launched an online protest and is asking people to “Skip Ender’s Game” because of anti-gay marriage comments made by Orson Scott Card, author of the 1985 book upon which the Lionsgate film is based.

"Do not buy a ticket at the theater, do not purchase the DVD, do not watch it on-demand. Ignore all merchandise and toys," the site implores. “By pledging to Skip Ender’s Game, we can send a clear and serious message to Card and those that do business with his brand of anti-gay activism — whatever he’s selling, we’re not buying."

The studio did not immediately respond Sunday to a request for a response. Author Card has been an outspoken opponent of gay marriage for years. In 2009, he joined the board of the National Organization for Marriage, which was created to pass California’s Proposition 8, banning gay marriage. And last year, he supported his home state North Carolina’s constitutional amendment to ban gay marriage, arguing that it would “be the bludgeon [The Left] use to make sure that it becomes illegal to teach traditional values in the schools.”

Card makes no bones about his stance. In an essay in the Mormon Times, he writes that gay marriage “marks the end of democracy in America,” that homosexuality was a “tragic genetic mixup,” and that allowing courts to redefine marriage was a slippery slope towards total homosexual political rule and the classifying of anyone who disagreed as ‘mentally ill.'”

The Geeks Out site says the group is organizing a series of "Skip Ender's Game" events in New York, Orlando, Seattle and other major U.S. cities to coincide with the movie's debut.

The story of “Ender’s Game” is set 70 years after a horrific alien war, and follows an unusually gifted child sent to an advanced military school in space to prepare for a future invasion.