(Updated: 4:23 PM, 06/17/10) One of the biggest movie sites in the world, IMDb.com, is facing a hornet's nest of controversy over its policy of publishing the ages of actors and writers who say it leads to ageism, TheWrap has learned. 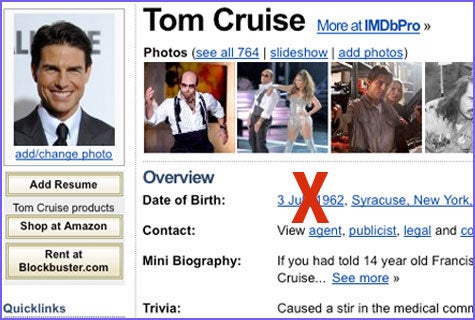 The Writers Guild of America, West, is leading an effort to convince the massive database — used by virtually everyone in Hollywood and far beyond — to permit people to remove their birth dates from the site.

"The Guild has a contract with IMDb to provide credits information and does not release information on age," Neal Sacharow, a spokesperson for the WGA, told TheWrap. "We have raised our concerns with IMDb about its listing of ages."

Representatives from Hollywood guilds including the Screen Actors Guild have reached out to the site to see about taking down the birth dates of people who are not movie stars like Angelina Jolie or Leonardo DiCaprio, according to an individual knowledgeable about the talks. (A spokeswoman for SAG declined to comment.)

The guilds argue that not just writers and actors, but also below-the-line workers as they crest 40 face fewer job opportunities in a business that tends to prefer 25 year olds. Listing their ages publicly is exacerbating the situation, they say.

But IMDb isn't eager to make the change, according to people knowledgeable about the disagreement.

Part of the issue seems to be a cultural one. IMDb comes from internet culture, which is data-focused and oriented to revealing everything imaginable (though not from a corporate perspective — just try to find a phone number for Google). Meanwhile, veterans of the entertainment industry are not particularly tech-savvy and often fearful of the reveal-all nature of the web.

(Update: Giving credence to claims that it is notoriously difficult to amend or remove personal information on IMDb, a television producer and entertainment agent both contacted TheWrap after this article was published to relay their own difficulties convincing the database to edit profiles.

The producer said that the age listed on their profile was incorrect, but that the site had not responded to an email asking them to remove that information, as well as a personal email address. The producer had even considered retaining a lawyer to try to pressure IMDb to take down the information

“I could never get anybody on the phone,” the producer told TheWrap. “It doesn’t seem fair that some profiles don’t have this information. Why do I want people to see where I was born.”

The agent said that two clients had incorrect ages listed on their profiles and had similar problems trying to get IMDb to amend their information. In the case of one of client, who was listed as being eight years older than he actually was, not even photocopies of a birth certificate and passport were sufficient to compel the database to change the listed age. The agent said that having a client listed as 38 when he was actually 30 likely impaired his ability to get work.

“They’re very fickle about what changes they do make,” the agent told TheWrap. “I don’t know were they get their information, but once its up there, God help you.”)

Another part of the tension comes from the nature of IMDb itself. Co-founder Col Needham believes the site has a responsibility to provide factual and comprehensive data, according to one source knowledgeable about the company (yes, his birthday is listed).

In most cases, individuals or their publicists provide the biographical data for profiles, much as they would with a Facebook account, but average users also can update the information on individuals if, for example, it gets reported in a newspaper or magazine.

To be sure, many profiles do not list birth dates. But once any information is listed, IMDb will only remove it if it is inaccurate, an IMDb spokesperson confirmed to TheWrap. In the case of birth dates, a person would have to actually prove the listed date is inaccurate.

"IMDb is committed to being the most comprehensive source of film, TV and celebrity information," an IMDb spokesperson told TheWrap. "Customers of IMDb trust that when they use our website, they are receiving comprehensive and accurate biographical information. When we are made aware of information that can be verified as inaccurate, we remove from IMDb, as nothing is more important to us than customer trust."

Others say it is near impossible to remove or change a date on IMDb, even if it's false.

The guilds are hoping pressure from them will convince the site — and Needham — to re-examine its rules.

IMDb has been conducting a series of industry sessions that have included conversations about the impact that listing ages has on getting work.

The site may be softening its position, but for now both the guilds and IMDb are remaining tight-lipped about their negotiations.

A spokesperson for the Screen Actors Guild declined to comment. A spokesperson for the International Alliance of Theatrical Stage Employes, Moving Picture Technicians, Artists and Allied Crafts of the United States (IATSE) said that organization was more concerned with issues related to health care and pensions and doubted that anyone hiring a grip or production crew member would make a decision based on an IMDb profile.

The Directors Guild of America has not been involved in the talks, but a spokesperson for the guild declined to comment.

It is no surprise that the writers' union is the most upset over potential age discrimination, people in the film and television business say. A massive age discrimination lawsuit filed on behalf of 165 television scribes ensnared 17 major television networks and studios and seven talent agencies for nearly 10 years. That ended in a $70 million settlement last January.

Paul Levine, a writer on "J.A.G." and a producer on the Supreme Court drama "First Monday," said that being in his fifties and sixties was a competitive disadvantage when he tried to find work in the industry.

"Not that anything ever overt was said, but not one time was I interviewed by my someone my own age. I was always interviewed by people 20 to 30 years younger," Levine told TheWrap. "It could be a problem if a show runner or his or her first lieutenant has scripts piling up, and they were trying to figure out who to interview. Looking at a credit list, if one writer is 35 and the other is 52, they're going for the 35 year old."

A lot of that has to do with the audience that movies and television shows are trying to reach, namely teenage boys.

"Of course there's ageism in Hollywood. In what business isn't there," Howard Suber, professor of film history at UCLA and the author of "The Power of Film," told TheWrap. "It's hard for somebody who is 50 to write convincingly about 16 or 17 year olds — at least contemporary 16 or 17 year olds."

But that's a generation gap that won't be narrowed by obfuscating a writer or a director's true age, Suber argues.

"Who are you kidding?" Suber said. "If you have to take a meeting in order to get hired, don't you think those young people who are interviewing you are going to have a pretty good idea of your age no matter how you try to disguise it?"