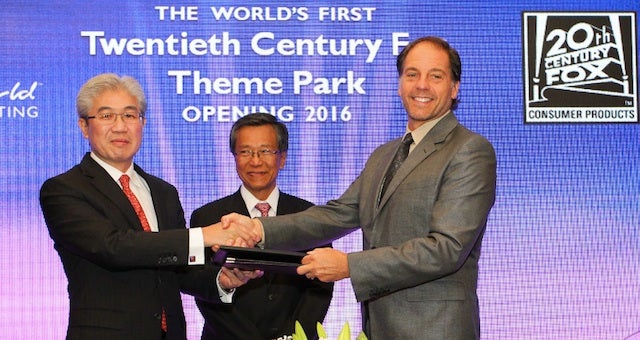 Twentieth Century Fox's upcoming theme park in Malaysia is the first of a global expansion into that business, the studio's head of consumer products told TheWrap Friday.

Jeffrey Godsick, president of Fox Consumer Products, said that the theme park, its first-ever full scale resort, "is really the beginning of a global roll out to key territories of larger scale resorts."

With the resort, a licensing partnership with Resorts World Genting, Fox is entering a lucrative arena long occupied by big studio competitors like the Walt Disney Company and Universal Studios.

"We are definitely interested in looking at emerging markets throughout the world to find additional recreational opportunities," Godsick said by phone from Malaysia, where the deal was announced Friday. "Look for more announcements on that in the future."

The rides and attractions will be inspired by Fox films such as "Ice Age" and "Alien," but existing themepark deals for "The Simpsons" will likely preclude that property from inclusion.

TheWrap spoke with Godsick about what this deal signals for Fox's theme park strategy, how it fits into its larger ambitions in the Asian market and why Pandora won't be making an appearance at Resorts World Genting, expected to reopen with Fox themed attractions in 2016.

Why is this an opportune time to get into the theme park business?
For us it's about finding ways to create opportunities for audiences around the world to immerse themselves deeper into our properties.

This location is just spectacular and Malaysia is a growing market.

Yet we hear so much more about China than we do Malaysia. Is its growth analogous?
The growth here is just tremendous. Being here and walking around the country's economic centers you're astounded by the amount of construction going on in Kuala Lumpur, and that's always a good indication of growth.

China is, of course, also growing, but it's so huge that it's somewhat different. We are definitely interested in looking at emerging markets throughout the world to find additional recreational opportunities. Look for more announcements on that in the future.

So do you see this as being part of a larger strategy when it comes to exploiting the Asian market?
Absolutely. Asia in general has been such a strong growth market for our brands. Our films and TV shows have done extremely well here and this is certainly part of that. They have such an awareness in Asia and this is just a chance to take them to the next level.

How will Fox be compensated? Will you get a stake in the profits or do you receive a one-time fee?
It is a licensing deal, but we will all share in its success and profits. They are financing all of the construction and putting up the funding. We are receiving a fee and a royalty structure. We look at our investment as bringing the [intellectual property] that we spend millions of dollars a year distributing and marketing around the world to the table.

When it comes to those films and television shows, which ones do you think may make an appearance at the theme park?
We're working on the specifics now, but we think that probably between 25 to 30 different brands will be represented in the park.

Among those, "Ice Age" is an incredibly strong brand in this area of the world and "Rio" is also very strong. There are a number of other animated properties that it would make sense to use and when it comes to live action, we're looking at "Life of Pi" and "The Night at the Museum." We have to see thematically what makes sense and whether a particular movie should inspire a ride or a live show.

Are there some brands that are associated with Fox that won't be on the table — I'm thinking of the "X-Men" films and "Star Wars"? Those are controlled by Marvel and Lucasfilm, no?
Yes. We do not control the licensing on "Star Wars" or Marvel.

What about Fox properties that are already being used in theme parks, such as "The Simpsons," which has attractions at Universal Studios, and "Avatar," which will have inspire a themed area at Disney's Animal Kingdom?
Disney has an exclusive deal, so that will impact the use of "Avatar" anywhere in the world. With "The Simpsons" we have the right to talk to other partners, but we've been in business with Universal on two theme parks and in the next couple of weeks we'll be talking about an expansion for "The Simpsons" at Universal.

We always like to talk to our current partners first, so I think we'll start with exploring other opportunities with Universal before we go elsewhere.

Do you see this as signaling a shift in how Fox views its theme park business? You have flirted with it before when you briefly operated the Fox Studios Backlot in Sydney over a decade ago, correct?
Sydney was really more of a brand experience. A backlot tour with a couple of attractions. This is our first full scale theme park with at least 25 separate attractions.

We do have other rides around the world at other theme parks, but this is really the beginning of a global roll out to key territories of larger scale resorts.