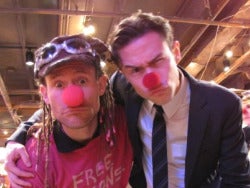 (Update, Wednesday, 2:45 p.m.: A police source tells RadarOnline that Dan Gordon-Levitt died of a drug overdose. A spokesperson for the L.A. County Coroner’s office did not immediately respond to TheWrap’s request for comment).

The two brothers were partners in the multimedia website HitRECord.org, a community where artists and filmmakers to post their work and are connected with potential commercial productions.

The Gordon-Levitt brothers promoted the site at the Sundance Film Festival in January.

Dan Gordon-Levitt, known as “Burning Dan” for his involvement in the annual Burning Man festival in Nevada, was an active photographer and fire dancer. He founded the Flow Temple, a school and performance group for Flow Arts that was based in Venice. He was 36.

In his biography on the Flow Temple site, he described himself as “one of only 28 world-wide leaders of official Burning Man Fire Conclave troupes.” And in a recent interview with PopEater, he called Flow Arts “a combination of performance art and dance and meditation and yoga and sort of self-transformation.”

Born in 1974, he shared an uncanny resemblance to his more famous brother. “It’s wonderful to be mistaken for him,” he once told PopEater. “He taught me to question the relationships other people have with their siblings because he would be my favorite person in the world even if I wasn’t lucky enough to know him as my brother.”

Joseph Gordon-Levitt, who starred in the recent films “Inception” and “500 Days of Summer” announced the death of his brother on Twitter.

He also posted an announcement about the death of his brother on the HitRECord website:

“BURNING dAN brightly embodied that bold beastly bliss sometimes referred to as “the creative spirit.” He was my chief collaborator on the foundational incarnations of hitRECord.org over the years and continues to inspire us ever the more. He would absolutely positively insist that we not let this bad news deter us on our collective mission. That said, I might not feel up to it for a little while,” Joseph Gordon-Levitt wrote on the HitRECord site.

No cause of death was given, and representatives for Gordon-Levitt did not immediately respond to TheWrap’s requests for comment.

Watch a video of one of Dan Gordon-Levitt’s performances: