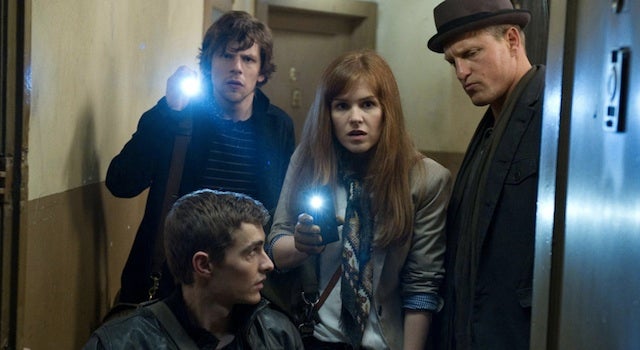 The magic-themed thriller "Now You See Me" pulled off a neat trick by edging out the bigger budgeted "After Earth" in Thursday night screenings.

The caper film made off with $1.5 million at 2,100 screens, while the Will Smith futuristic adventure attracted a meager $1 million in ticket sales at 3,401 locations, according to studio estimates. Also read: Can Will Smith Turn His Son Jaden Into the Next Fresh Prince of Hollywood?

Neither film is projected to be crowned the box-office winner, however. That honor goes to "Fast and Furious 6," which is on track to make off with more than $40 million in its second weekend of release.

Though "Now You See Me"s' accomplishment is notable — coming as it did on fewer screens and armed with less star power — it did have one extra set of showings to rack up those numbers. "After Earth" began its screenings at 9 p.m. while "Now You See Me" started showing at 7 p.m.

"After Earth" is projected to finish the weekend with a $35 million haul, according to industry analysts, but it's not clear if its relatively weak showing on Thursday will mean that those estimates will need to be revised downward.

The $130-million film is being released by Sony and co-stars Smith's son Jaden. Given Will Smith's track record of releasing blockbuster event films like "Hancock" and "Men in Black" in the height of summer, the sluggish opening is surprising.

Reviews have been savage, however, and promotional materials leaned heavily on the less-tested Jaden. Moreover, even with a star as appealing and recognizable as Smith, launching an original film in a sea of sequels is always a challenge.

"Now You See Me" was produced by Summit/Lionsgate and is expected to generate as much as $20 million in its debut weekend.