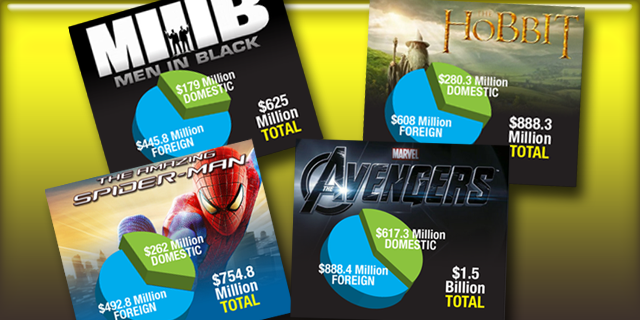 Foreign audiences are buying what Hollywood is selling, pushing the industry to a record-breaking year at the worldwide box office. Internationally, ticket sales grew by 3 percent to $23.1 billion compared to $22.4 billion the previous year, with foreign territories accounting for 68 percent of the top 10 grossing films (see accompanying charts). Thanks to a 5.8 percent rise at the domestic box office from roughly $10.2 billion to $10.8 billion, according to Rentrak, it was the biggest tally in box-office history.

“We are the beneficiaries of growing markets,” Chris Aronson, head of 20th Century Fox's domestic distribution, said. “You’re seeing big numbers coming out of places like China that keep increasing every year — and other places like India and Russia that are evolving. They’re not yet mature moviegoing markets, but they’re going to be fantastic.”

All of this expansion has come while much of the world, particularly Europe, has been mired by recession. Yet studio executives say that a massive expansion of IMAX and 3D-capable theaters in certain regions has cushioned the blow in softer markets like Italy and Spain.

“We’ve seen some downturn in parts of the world, but the tremendous growth we’ve experienced in other places like Russia, Latin America and now China has compensated for it,” Veronika Kwan Vandenberg, president of distribution at Warner Bros. Pictures International, said.

Of course, some of those areas present thorny regional challenges, perhaps none more so than China. With its massive population of moviegoers, China remains a marketplace with almost boundless potential. However, its rigid bureaucracy is frequently protectionist and suspicious of foreign investment, making it an elusive profit center.

Things are improving, though. Thanks to a much touted trade agreement that was signed last year, more non-Chinese films can be distributed in the country. As a result, analysts now think that China is poised to become the second largest market for U.S. films, surpassing Japan.

By 2020, some speculate it could even eclipse the United States.

That doesn’t mean China has always welcomed the increased competition with its own domestic-made films. After authorities became concerned that the influx of U.S. blockbusters was hurting their own local productions, they scheduled “The Amazing Spider-Man” and “The Dark Knight Rises” to open against each other last summer. Industry executives say that significantly cut into their box office takes.

More recently, “Skyfall” became the latest film to run afoul of China’s stringent censors and was forced to re-edit scenes. It also saw its release in the country pushed back from November to January to give Chinese films a wider berth.

“It’s a very interesting, very exciting country right now, but the whole aspect of having a country that on the one hand is becoming more and more capitalist, but on the other hand still has lot of government control, just makes it extremely difficult to navigate,"  said Charles Roven, producer of “The Dark Knight Rises." “Total Recall,” for instance, cost $125 million to produce but only managed to earn a meager $58 million stateside. It mopped up some of that red ink by grossing $139.6 million, perhaps benefiting from audiences who were unfamiliar with the 1990 Arnold Schwarzenegger original.

However, box-office analysts caution that the days of foreign markets feasting on hamburger and mistaking it for steak may one day come to an end. “International audiences are more forgiving, but the bar is set higher now in terms of the need to do just more than just putting special effects on screen,” said Bruce Nash, founder of the box office statistics site The Numbers. “A studio can no longer guarantee success simply by spending $150 million on a movie.”

Credit for the sizzling box office does not rest simply with bigger budgets, analysts and studio executives say. They contend it goes to a slate of films like “The Amazing Spider-Man” or “Skyfall” that have an aspirational quality that makes them easily accessible in some far-flung parts of the globe. “Whether you’re growing up in Moscow, Seoul or Kansas City, you could imagine yourself being Spider-Man, and I think many guys fantasize about being James Bond,”  said Rory Bruer, worldwide president of distribution at Sony Pictures. “These stories may be set in New York or England, but they don’t belong to us, they belong to the world.”

Not that all superhero films are created equal. Take “Iron Man” and “Iron Man 2” — some box-office watchers think that the character’s narcissism and arrogance rankled Asian audiences, resulting in the films being the rare blockbusters that actually performed better domestically than abroad. However, partner Iron Man with Captain America and Thor in “The Avengers” and the message of team-work resonates much more strongly with the same audiences that may have rejected the character in his solo ventures. The result was that $888.4 million of the film's box office take came from foreign territories.

“The narrative arc transcends borders,” said Kristen Simmons, senior vice president of the worldwide motion picture group at the research firm Ipsos MediaCT. “You have these flawed characters coming together for the common good and that is culturally appealing across the world.” Studios are also taking pains to tailor stories so they aren’t as geographically specific — setting them in the future or in a city or countryside that could double for urban or rural environments anywhere in the world. And they’re peppering their cast with international stars, so their films will be more reflective of the ethnic makeup of their audiences.

Among the recent instances of global casting were Indian star Irfan Khan’s key roles as a scientist in “The Amazing Spider-Man” and the narrator of “Life of Pi,” as well as Wang Xueqi, the so-called Sean Connery of China’s addition to the cast of the upcoming “Iron Man 3.” That can do a lot to increase playability abroad and to bring in fans who remain stubbornly immune to the charms of Robert Downey Jr. or Will Smith.

Sometimes the bet works, as in the case of "Life of Pi," which rode its international setting and cast to $356.3 million at the foreign box office. That far surpasses the $95.6 million in domestic receipts and is the major reason the costly film will make a profit despite its $125 million budget and esoteric storyline about the search for faith.

Other times the globe-trotting gamble doesn't pay off. "Cloud Atlas" spanned time, space and multiple continents, but bombed both domestically and abroad. Despite its sprawling, international troop of actors, the film eked out a mere $71 million worldwide, which won't cover its reported $100 million production costs.

Producers say that casting decisions can’t just be a case of tokenism, they have to be dramatically sound. Nor do the films have to be pandering.

“If you stay true to the concept and elements that originally attracted you to the material, you can still make it appealing on a worldwide basis,” Roven said.

“I don’t believe making a movie accessible means you have to dumb them down,” he added.