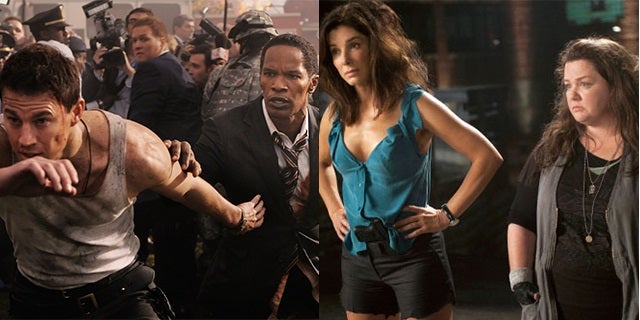 This summer is proving that when it comes to stars at the box office, it's the right fit and the movie that matter more than their wattage.

The past weekend’s $40 million opening of Fox’s "The Heat" certainly suggests Melissa McCarthy is a bona fide box-office force, coming on the heels of "Identity Thief," still easily the year’s biggest comedy.

"She's definitely becoming a star, but this movie had a lot of things going for it," said Exhibitor Relations VP and senior analysts Jeff Bock.

He cited the legitimately funny script, McCarthy's chemistry with co-star Sandra Bullock and "Bridesmaids" director Paul Feig, and the fact that "The Heat" is the season’s only movie with two female leads as equally important to its success. Fox's marketing campaign, which targeted women almost totally, was dead-on.

On the other hand, Channing Tatum and Jamie Foxx’s names on the marquee couldn’t save Sony’s $150 million "White House Down" from a disappointing $25 million first weekend. Tatum was about as hot as a young actor can be in terms of the box office. In 2012 three of his films – "The Vow," "21 Jump Street" and "Magic Mike" — debuted with more than $36 million and he had a high-profile turn in "G.I. Joe Retaliation."

Some critics had a tough time buying Foxx – who was coming off "Django Unchained" — as presidential, but "White House Down" really was hurt far more by the very similar "Olympus Has Fallen." That much less expensive president-in peril movie starring Gerard Butler opened to $30 million in March and has gone to take in nearly $100 million for FilmDistrict. And the weekend competition for action fans from "World War Z" and "Man of Steel was probably an even bigger factor.

That’s not to say a star can’t make a huge difference. "World War Z" was a passion project for Brad Pitt, who appears in nearly every scene in the film. And the star seemed to carry the production snafu-plagued movie on his back in terms of promoting it before the release. It’s working — the zombie thriller has made $259 million worldwide in two weeks.

"You put Brad Pitt in a zombie movie and people get excited," Bock said.

"He really came out a winner here, first for insisting on reshooting the ending, and then being able to ride out the bad buzz, and people get wind of that."

It’s hard to imagine director Baz Luhrman’s "The Great Gatsby" doing the kind of business it’s done — $140 million domestic and $320 million worldwide for Warner Bros. – with anyone other than Leonardo DiCaprio in the title role. Robert Downey Jr. has become billionaire Tony Stark for fans of  the "Iron Man" franchise and that translated into $405 million domestically and $1.2 billion worldwide for "Iron Man 3." But the combination of the appeal of "The Avengers" and the Disney marketing machine that maximized the film’s global potential had plenty to do with that, too.

Vin Diesel was clearly the right man for the job in "Fast & Furious 6," as was Chris Pine in "Star Trek Into Darkness." In both of those cases, it was the sum of the movie’s parts that mattered most to moviegoers, but the presence of the stars no doubt added to its box-office muscle.

"When you brought back Vin Diesel, it definitely added to the strength of that character and he has a following, so I’m sure it helped put it over the top," Bock said.

Henry Cavill wasn’t well-known to U.S. audiences, but his playing Superman hasn’t seemed to hurt the box office for the "Man of Steel," which crossed the $500 million mark globally over the weekend.

Before "White House Down," Sony has seen two movies with unusual star turns go in different directions. Will Smith fizzled in "After Earth," but his son Jaden Smith was really the focal point of the sci-fi adventure, and he’s not a star yet, at least in the U.S. The studio’s biggest success of the summer, at last in terms of cost-to-return, has been the oddball and raunchy Seth Rogen comedy "This Is the End," which features a handful of young stars including James Franco, Emma Watson and Jonah Hill playing over-the-top versions of themselves.

Another of this summer's success stories is Summit's magic-themed heist thriller "Now You See Me," which features an ensemble cast and crossed the $100 million line this weekend. The summer's most intriguing test of how much star power can matter to a movie is probably coming this week, when Disney opens "The Lone Ranger."

"This movie wouldn’t have been made without Johnny Depp," said Bock. He said there’s little doubt Depp and co-star Armie Hammer will be its selling point with teens, most of whom think of Western as a direction and haven’t heard of Clayton Moore or Jay Silverheels.

The other side of the coin would be Warner Bros.’ "Pacific Rim," which opens July 12. Director Guillermo del Toro is the only "name" associated with the project, which features giant robots swinging battleships around. But that won’t hurt it, Bock said.

"How can kids who are playing ‘Skylanders’ (the latest PlayStation 3 sensation, for you non-video game types) not want to see this movie?" Bock said. "They don’t care about stars – they want to see monsters fighting monsters."