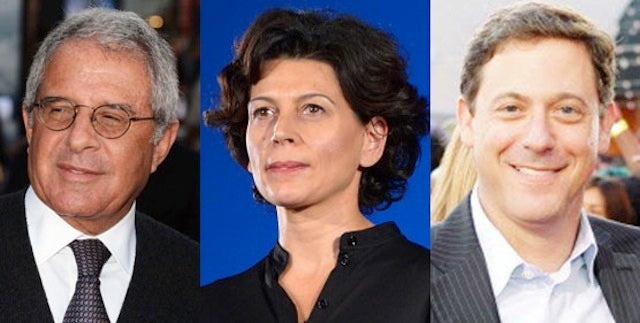 A little over a year ago, Universal Pictures Chairman Adam Fogelson sat alone at a table during the after-party for the premiere of Oliver Stone's “Savages” and somewhat plaintively asked a reporter from TheWrap when the abuse would end.

After years of costly flops including “The Wolfman," “Cowboy & Aliens” and, more recently, “Battleship,” Fogelson felt like the media's whipping post.

But a funny thing happened in the days after that premiere. A movie called  “Ted” opened to more than $50 million domestically and went on to gross more than $500 million worldwide. Universal has been on a tear ever since, this summer solidifying its 180-degree turn to unexpected box office dominance.

Of the 14 movies Universal has released in that time, eight debuted at No. 1 at the box office in their first weekend in wide release, and the last seven all bowed at No. 1, the most recent being “Despicable Me 2.”

That one grossed more than $140 million over the Fourth of July weekend, ensuring that it would not only be the summer’s top animated movie — beating animation kings Disney-Pixar, Fox, DreamWorks Animation and Sony — but also one of the summer’s biggest success stories ever. “After Adam (pictured below with "Fast 6" director Jeremy Lin) got elevated to the position he’s in now, he and Donna (Langley, studio co-chair pictured above) began to formulate a new strategy,” Chris Meledandri, founder and CEO of Illumination Entertainment, Universal’s animation partner and the producer of “Despicable Me," told TheWrap. “What you saw post-'Battleship' is that strategy starting to kick into gear.”

Supported by longtime Universal Studios President Ron Meyer, the studio leaders partnered with successful creators like Jason Blum ("The Purge") and Seth MacFarlane ("Ted"), sought out new franchises and set a series of smart scheduling decisions and bold marketing plans. Studio executives spoke to TheWrap for this story but declined to go on the record. Universal had previously succeeded with thrillers like "Safe House" and R-rated comedies like "Bridesmaids." But franchises were a weak spot; when it tried to make blockbuster films based on existing brands- like “Battleship” – it failed.  The “Bourne” movies were stuck without star Matt Damon, and “Fast & Furious” almost sputtered to defeat with "The Fast and the Furious: Tokyo Drift” in 2006.

This year the studio succeeded in rejuvenating both “Fast and Furious” and "Bourne" movies, with Jeremy Renner replacing Damon in the latter. Even the reboot of the dusty “American Pie” franchise made more than $230 million worldwide. Still, no movie exemplifies Universal's restorative powers more than “Fast & Furious.” The franchise almost went straight-to-DVD after "Tokyo Drift." Instead, Universal trusted its marketing team and director Justin Lin (photo right with Fogelson) to steer the franchise into a new era, from a street-racing story into a series of global heist movies.

"Fast & Furious" and "Fast Five" combined to make almost $ 1 billion worldwide, setting up this summer’s "Fast & Furious 6," which has made almost $700 million across the globe on its own. Also pivotal to the rebirth of the "Fast" movies was their appeal to an underserved audience – Latinos. Hispanics comprised 32 percent of the movie's audience its opening weekend, according to the studio.

Universal, which was the first studio to have an executive dedicated exclusively to Latino audiences, courted that same group with “Mama,” a horror hit that opened to $32 million this January. Produced by Mexican director Guillermo del Toro and directed by Spain's Andres Muschietti, "Mama" owed almost half of its opening-weekend sales to Hispanic moviegoers.

To help reach that audience, the studio recruited Del Toro to narrate a Spanish-language featurette and attend press junkets for Spanish-language media outlets. It also debuted a trailer with Spanish graphics on Univision’s website the day before its official release.

“I think 'Mama' is the 21st-century benchmark case study of how to make and market a film that is for, and by, Hispanics but was always meant to attract a broad worldwide audience,” Fabian Castro, vice president of multicultural marketing at Universal, told thecredits.org in March.

Fogelson and distribution chief Nikki Rocco have also adopted a more experimental release strategy, seeking to capitalize on what are typically considered off months.

Historically, R-rated comedies do best when they open during the summer. But to avoid "The Hangover Part III," and "The Heat," the studio released “Identity Thief, a comedy starring Jason Bateman and Melissa McCarthy, in the movie doldrums of February, when it opened to a healthy $35 million and dropped only 20 percent the next weekend, thanks to a lack of competition. Some of those efforts, like releasing “Tower Heist” on VOD the same day as it debuted in theaters, failed. Yet the majority worked. The studio opened "Pitch Perfect" (photo left) in a limited number of theaters last September before spreading it wide. Positive word of mouth propelled the teen musical comedy to $65 million in grosses domestically and $113 million worldwide. It also opened "Fast Five" in late April in 2011, believing it could extend the summer into April. It opened to $86 million.

This year, it pulled a similar trick with "Oblivion," a sci-fi film with aging action star Tom Cruise. It opened to $37 million in April and held strong in its second weekend before it was swallowed by the summer’s first true blockbuster — “Iron Man 3.” It also racked up almost $200 million overseas.

When TheWrap asked an executive at a rival studio what was behind Universal’s success, he said:  “Their marketing has gone from good to great. If you look at movies like ‘The Purge,’ the tone was great, the outdoors were great and they couldn’t sell the star so they sold the concept.”

Brad Fuller, who produced “The Purge” alongside Blum, said Universal allowed Blum to oversee development and production with minimal notes, and built online buzz in a strategy overseen by Doug Neil.

“Although the TV campaign was a confident campaign, the part of it that felt innovative was the internet presence they created,” Fuller told TheWrap. “They created chatter about the movie with tweets and on Facebook, and that seemed to fuel the success of that movie.”

A few flops may loom on the horizon — its next release, "R.I.P.D," is tracking poorly, and costs on one of its major winter releases, "47 Ronin," spiraled out of control. Yet at the premiere of “Despicable Me 2,” the change at the studio was visible on Fogelson’s face – a newfound, contented smile.

For the record: An earlier version of this story said that nine of Universal's last 14 movies opened #1 at the box office in their first weekend in wide release. Only eight did. "Les Miserables" opened on Christmas Day and grossed the most that day, but did not finish the weekend at #1. Moreover, the "Fast and Furious" franchise did not almost go straight to DVD before "Fast Five" (2011) but before "Fast & Furious" (2009).