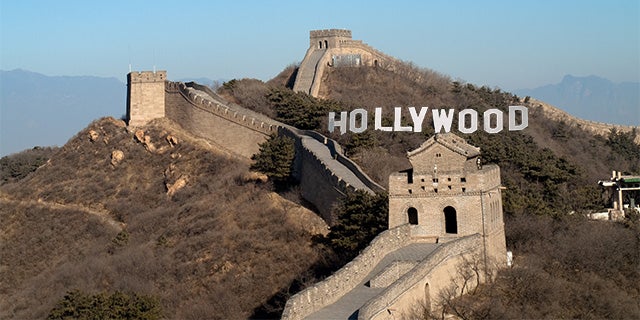 For the last few years, Hollywood has sharpened its focus on releasing English-language movies in China, one of the world’s fastest growing film markets. But that may not be enough.

In the next few years, they may want to make the movies in Mandarin as well.

Its first effort, fantasy-action comedy “Journey to the West: Conquering Demons,” from "Kung Fu Hustle" actor-director Stephen Chow, earned more on one day — ironically, Valentine’s Day — than any other movie on any day in Chinese history, grossing 122 million reminbi ($19.6 million). It also has also become the fastest film to reach $100 million in its homeland.

And VRPA’s second film, ”Say Yes!,” a Chinese-language remake of a TV drama, set a new record for a romance film opening on Valentine’s Day, which this year coincided with Chinese New Year, earning $7.5 million.

Also Read: China Can Be a Gold Mine for Hollywood, But…

Together, the two films accounted for 85 percent of the box-office grosses on the Hallmark holiday.

“This will be the largest indigenous market outside of English language movies in the U.S,” Greg Basser, CEO of Village Roadshow Entertainment Group, told TheWrap. “It’s still very immature, but we have a big familiarity with the region and a good brand in the region.”

They aren't the only ones tapping into the market.

DreamWorks Animation has partnered with three Chinese companies to launch DreamWorks Oriental (logo to the right), which will be headquartered in Xuhui. It will make original Chinese-language films based on local stories, and the first original movie should arrive in 2017.

Fox International Productions, a subsidiary of News Corp., has already released local-language movies in a number of markets, including China. Last October, it partnered with the Bona Film Group to co-produce more such films.

“With China growing as a market, you're only going to see more of this," Phil Contrino, vice president and chief analyst for BoxOffice.com, told TheWrap. "A Hollywood movie won't appeal to a Chinese moviegoer just because it flies to Beijing or Shanghai for a sequence. In the same way, an American might not watch a movie in Chinese with an all-Chinese cast just because 10 minutes of it are in America."

While the success of Chinese-language movies is not new, a recent surge in broken records reflects the irrepressible growth of the marketplace. A series of Chinese companies, led by Beijing Enlight Pictures, account for the biggest hit yet in China, “Lost in Thailand,” which this year broke the record set by "Avatar" in 2009.

Fox International Productions, which distributed the record-setting "Journey to the West" in Taiwan, Vietnam and Malaysia but not China, has charted smaller hits with “Love in Space,” a Hong Kong-set romantic comedy, and "Hot Summer Days."

No wonder the Australian-based Village Roadshow, whose Village Roadshow Pictures is a major co-financier and co-producer for Warner Bros., is planning to make four to eight Chinese language pictures a year, budgeted from $2 million to $25 million. The next release is Keanu Reeves' directorial debut, "The Man of Tai Chi," which Universal will distribute.

Also Read: 'Lost in Thailand' Has Huge Box Office in China – Will It Translate to U.S.?

In 1988, the two companies signed a joint venture agreement to form Golden Village, a multiplex operator across Asia. Together, they opened Singapore’s first movie theater and at one point operated cinemas in Singapore, Malaysia, Thailand, Taiwan, Hong Kong, Korea and India.

They also opened the first multiplex in Shanghai. “Immodestly, I will say we multiplexed Asia,” Basser said.

More than 20 years later, Village Roadshow decided it would rather produce films in China than simply own physical cinemas. Just before the 2009 release of “Avatar,” the most successful movie in Chinese history until "Lost in Thailand," Basser and Village Roadshow Chairman Rob Kirby met with Orange Sky to talk about the growing audience in China.

“There are over 300 different film companies in China,” Basser told TheWrap. “There’s this huge appetite. Although we’ve released 70-odd [English-language] pictures in China, we decided to focus on making films in Chinese for the Chinese market.”

And the marketing expense? “A fraction," according to Basser, because studios don't have to spend anywhere close to the same amount on TV and print advertisements in China as in the U.S.

Of course, while the success of some of these Chinese-language local productions has indicated an appetite for more local products, none of this means the Chinese will stop watching American-made films with subtitles or dubbing.

Contrino pointed to the recent success of “Cloud Atlas,” a movie that bombed in the United States and has now made just as much in China as it did domestically. Global box-office receipts hit record levels in 2012, thanks in large part to the growth of the Chinese market.

However, the Chinese government has long stifled filmmakers, producers and distributors from across the globe by imposing a quota on the number of imported films it would permit. It also has a limit on the percentage of box office grosses that could come from foreign titles.

Several companies have found ways to get around the quota, most notable co-productions that film scenes in China and feature Chinese factors.

Relativity Media partnered with several Chinese fillm companies in 2011, paving the way for all of its fillms to get a release there. Its latest Chinese co-production, "21 and Over," opens March 1.

DreamWorks Animation has planned “Kung Fu Panda 3,” the latest installment in the billion-dollar-franchise, as a co-production. And Marvel Studios did the same with “Iron Man 3,” due in theaters May 3, though it has not officially registered it as a co-production yet.

Yet Hyde Park Entertainment CEO Ashok Amritraj, whose company operates a fund out of Singapore that it will use to make local language co-productions, said the number of co-productions remains small because of legal and logistical difficulties.

"It's getting more tricky to qualify English-language films as co-productions," Amritraj said. "The rules are fairly strong and one has to be very careful how one qualifies."

Most co-productions face another hurdle — an ongoing Securities and Exchange Commission investigation. As a result of allegations that production companies were bribing people to secure filming permits, the SEC is looking into whether American companies have violated the Foreign Corrupt Practices Act, which bars U.S. companies from bribing public officials in other countries.

Despite a recent story about how this has unnerved several companies, some of whom declined to comment to TheWrap about this piece, lawyers said that the investigation served more as a warning flag for future projects.

A bigger question looms: As the burgeoning market for Chinese-language movies evolves, what are its chances of an even wider audience — possibly even one in the United States?

Few Chinese-language movies that were successful at home have drawn crowds in the U.S. "Lost in Thailand" made less than $30,000 in its first weekend in the U.S. while "Love in Space" only played briefly in New York.

"Crouching Tiger, Hidden Dragon" is the best example of a Mandarin movie that succeeded stateside, but most see that more as an exception than the rule.

"There is not yet a formula where local language films can play to anything other than a real niche audience in America or some of other foreign countries," Amritraj said. "Once you do it in Mandarin, you are restricting yourself to the Chinese marketplace."

Yet Village Roadshow and DreamWorks Animation are still betting their movies will eventually travel around the world.

“Can a Chinese movie go worldwide?” Contrino asked. “The first step is appealing to their own people. After that, they can get more ambitious and try to compete with Hollywood on a global scale.”