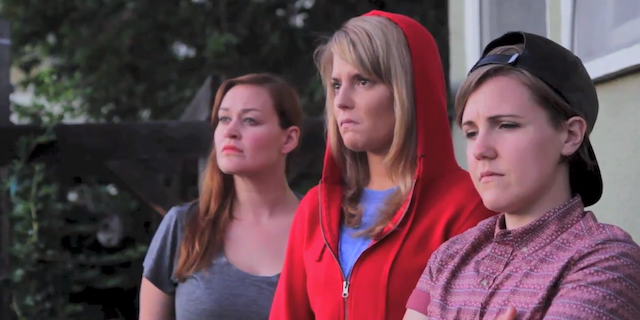 Grace Helbig, Hannah Hart and Mamrie Hart will all star in a new movie for producer Michael Goldfine and Chill, the WME-backed video site that has also become an online storefront for films, comedy specials and TV shows. Tentatively titled “Camp Takota,” this is the first feature film for the YouTube stars, who boast more than 2.5 million subscribers on the platform.

Chill announced the news at VidCon, the annual convention for online video.

Goldfine has long nurtured the story idea of a man whose life falls apart and returns to summer camp to be a counselor. Yet when he found three engaging young women who were drawn to it, he catered the story to their talents. Chris and Nick Riedell, known online as The Brothers Riedell, are directing the movie.

“Because I’ve had a lot of good experience in digital I decided to go direct to consumer to make a movie,” Goldfine, an executive producer on Kevin Hart‘s latest documentary “Let Me Explain,” told TheWrap. “But I said if I’m going to do this I have to find big names that can carry a movie.”

These are stars who communicate with their fans every day in video blogs, and Chill will not only distribute the film but launch a new product, “Insider Access,” which enables the film’s stars to update fans via production diaries, videos from set and cast interviews.

“It would be unusual for them not to talk about the movie they are making on set and talk directly to fans,” Chill’s head of entertainment Marc Hustvedt told TheWrap. “The audience is hungry to know all of the stories; the making of the movie becomes almost as satiating as the film itself.”

Hustvedt argued early and frequent communication between production and fan is essential to a successful marketing campaign for an independent movie. He pointed the widespread awareness of the upcoming “Veronica Mars” movie thanks to the Kickstarter campaign.

Also read: Phil DeFranco Was Ready to Give Up on YouTube – Until Google Gave Him Money

While most studios begin marketing the movie closer to the conclusion of production, having Helbig and the Hart’s engage fans across Twitter, Facebook and other social platforms from the start can generate comparable buzz and lower the cost of a traditional campaign. Chill will centralize that communication in one place – the film’s page.

The “Insider Access” content will be free, but the movie, as with the other films sold on Chill, will be sold for a price. Chill, which has gone through a few iterations over the past few years, has been preaching the direct to fan angle over the past several months.

The company succeeded selling comedy specials for the likes of Maria Bamford but could not convince fans to crowdfund subsequent episodes of a TV series from Jason Mewes.

Hustvedt was unfazed. Though YouTube stars like “Fred” (real name Lucas Cruikshank) have made their own movies in the past, he predicted this would “be bigger than any of the YouTube movie crossovers.”

Watch the trailer and decide for yourself: