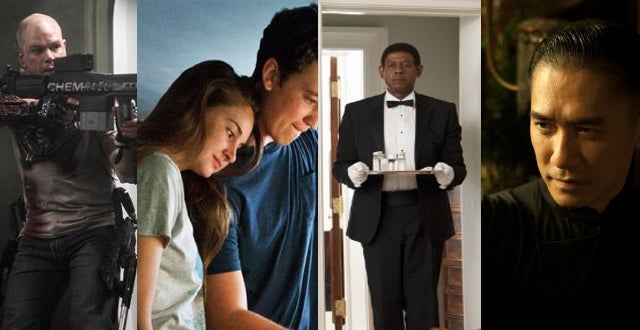 If you've been an avid moviegoer this summer, we understand that you might be worn out by now.

Maybe you've got superhero fatigue or apocalypse overload, or maybe you're just fed up to the gills with gunshots and fights and things blowing up and tough guys overcoming impossible odds.

See photos: 15 of the Movies Set to Light Up Toronto — and Awards Season

And maybe, as July comes to an end, you're ready to stay away from the multiplexes for a while, to spend August catching up on "Breaking Bad" or "House of Cards" or rooting on the Dodgers.

But hang on a second. The summer movie landscape may seem as blighted and unappealing as the ravaged planet in "After Earth" or the zombiescape of "World War Z" – but with a month to go, there are actually a few movies that might be worth leaving the house to see.

Besides, the volume of releases slacks off in August, meaning that some of these flicks could have a little more room to breathe than their May, June and July counterparts, which were shoved out in a brutally overstuffed release schedule that meant anything that didn't come out of the box with a bang was DOA.

Note: We've only seen two of these movies, "The Spectacular Now" and "Short Term 12," so don't blame us if they're not as good as we think they might be. But this is summertime, and hope springs eternal.

See video: Why the Failure of 'Lone Ranger' May End Golden Age of Hollywood Producers "The Spectacular Now" (Aug. 2)
Remember when heartfelt coming-of-age movies were part of the major-studio mainstream release schedule? For today's moviegoers, "The Breakfast Club" and "Say Anything" and their ilk are ancient history, and films like "The Spectacular Now" are almost entirely the province of indie companies.

But the indie arena suits this film, which consistently understates rather than overplays and features dead-on performances by Miles Teller and Shailene Woodley that make them seem like real teenagers, not movie characters. Director James Ponsoldt, coming off the excellent but more harrowing "Smashed," became a Hollywood hot property on the heels of this film's Sundance debut: He's now signed up to direct a Hillary Rodham Clinton biopic and is working on a few things for the Weinstein Co., including an adaptation of the musical "Pippin."

See video: Shailene Woodley Is the Perfect Girl Next Door in 'The Spectacular Now' Trailer "Elysium" (Aug. 9)
This is the big one. In 2009, Neill Blomkamp put a fresh spin on the sci-fi flick with "District 9," which came out of nowhere to capture a Best Picture nomination. His follow-up is also set in the future, with bigger names in the cast (Matt Damon, Jodie Foster) and a plotline (guy with cancer tries to fight his way to the one-percenters' haven in the sky where they can cure it) that should allow Blomkamp to once again slide social commentary into the action genre.

Will this be the rare movie that brings a brain to a too-often-mindless arena? Hopes are high enough that "Elysium" tops our must-see list. "Lee Daniels' The Butler" (Aug.16)
You've followed the controversy, now see the movie. The Weinstein Co. and Warner Bros. waged a pitched battle over the title "The Butler," with TWC losing the war but gaining a compromise that at least allowed them to use the word butler for this story in which the always-reliable Forest Whitaker stars as a real-life White House butler in eight 20th century administrations.

Daniels is hardly the sure thing he might have seemed after his Oscar winner "Precious" — his last film, "The Paperboy," was an absurdly overheated Southern Gothic potboiler that needed to be a little worse to enter so-bad-it's-good territory. But he figures to show more restraint this time around, and you know that Whitaker and Oprah Winfrey and Terrence Howard and Cuba Gooding Jr. and their castmates will all be acting up a storm. "Kick-Ass 2" (Aug. 16)
This is the movie that was too violent for Jim Carrey, and you can decide whether that's a recommendation or not. A sequel to the 2010 action comedy that brings back stars Aaron Taylor-Johnson, Christopher Mintz-Plasse and Chloe Grace Moretz, it features Carrey as a superhero leader called Colonel Stars and Stripes – but after the shootings at Sandy Hook Elementary School, Carrey tweeted that he wouldn't do publicity for the film because "in all good conscience I cannot support that level of violence."

If the original "Kick-Ass" is any indication, the film's violence will be excessive but also cartoonish and tongue-in-cheek. Like the original, "K-A2" is based on comic books by Mark Millar and John Romita, Jr., which should guarantee that it will be as zestfully tasteless and gloriously offensive as its predecessor. "The World's End" (Aug. 23)
Edgar Wright made three movies before this one, and the first two – "Shaun of the Dead" and "Hot Fuzz" – were delightfully twisted comedies starring Simon Pegg and Nick Frost. So it's good news that "The World's End" stars Pegg and Frost as heavy drinkers whose attempt to complete a legendary pub crawl encounters some unexpected obstacles of alien origin.

The film won mostly rave reviews after its July release in the U.K. – and in a summer long on end-of-the-world extravaganzas, this might be the right one to put the cherry on top of the impending apocalypse. "The Grandmaster" (Aug. 23)
You want action? You want fights? You want kick-ass summer multiplex mayhem? Then you might want to get it not from some Hollywood VFX factory, but from Hong Kong's Wong Kar-wai, a director whose cinematic legacy is so unassailable that he is the only Chinese filmmaker to head the Cannes jury, and was the subject of a Matthew Weiner-hosted tribute on Monday night at the Motion Picture Academy.

"The Grandmaster" is a drama based on the life of Ip Man, a master of the Wing Chun style of martial arts. By all reports it mixes extraordinary action footage (and not a CG monster in sight!) with quieter and more philosophical sequences that have prompted occasional comparisons to the landmark "Crouching Tiger, Hidden Dragon." "Short Term 12" (Aug. 23)
One of the quietest but most touching films on the list, Destin Daniel Cretton’s low-key drama won the jury and audience awards at this year’s SXSW. It features a remarkable performance from Brie Larson as the supervisor at a foster-care home for at-risk teens, and has an array of fine teen actors playing the kids.

"Short Term 12" is a quiet gem that never gets mawkish but isn't afraid to be sentimental. Cretton, who adapted his short film based on his own experiences as a counselor, has made a touching, open-hearted movie that faces the darkness but also looks to the light, and one that insists that family can be forged in the toughest of circumstances.