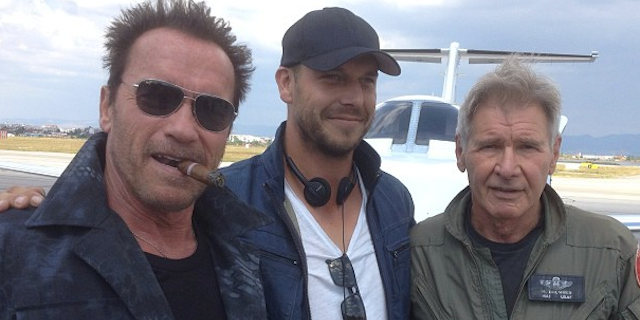 The 66-year-old action star tweeted the photo of himself smoking a cigar while posing with Ford in pilot attire, and “Expendables” director Patrick Hughes.

“It was a fantastic first day of filming on ‘Expendables 3,'” Schwarzenegger wrote. “Great to work with Harrison and our director, Patrick.”

Ford was cast in the upcoming action extravaganza to replace Bruce Willis after the “Die Hard” star got in a monetary dispute with producer Sylvester Stallone.

“Willis out…Harrison Ford in,” Stallone tweeted in early August, adding that the “Die Hard” star was “Greedy and Lazy…a sure formula for career failure.”

By the looks of the photo, Ford is not lazy, at least.

“The Expendables 3” is blasting into theaters next summer on Aug. 15. Here’s the full photo: