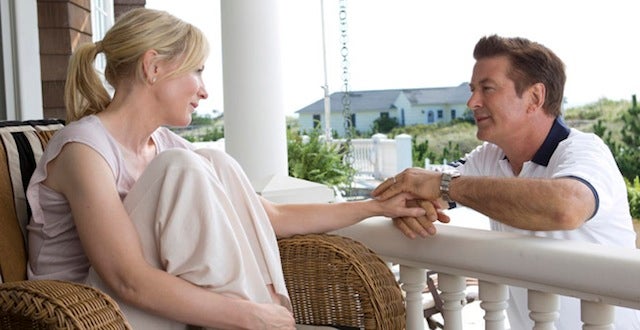 If you’re going to steal, steal from the best.

That must be what Woody Allen was thinking when he semi-lifted the plot and character outlines of Tennessee Williams’ “A Streetcar Named Desire” for his latest rueful comic drama, “Blue Jasmine.”

Or maybe it’s just that leading lady Cate Blanchett gave a definitive performance on stage both in Sydney and New York as Blanche Dubois in “Streetcar” a few years back, and it’s still echoing through her work.

She’s the major reason to see “Jasmine,” a mixed bag of a movie, one that finds Allen, who both wrote and directed, returning to a more serious, unsettling tale after his recent fizzy forays, “Midnight in Paris” and “To Rome With Love.”

Blanchett plays Jasmine, a formerly wealthy Manhattan socialite suffering from badly jangled nerves and a tendency to talk out loud to herself. Life has been hard on her ever since her philandering businessman husband (Alec Baldwin) was revealed as a crook and then killed himself while in prison.

Also read: Zach Braff Taught Crowdfunding to Woody Allen – and He Liked It

Following a breakdown, a destitute Jasmine heads to San Francisco at the beginning of the film to try to rebuild her life while staying with her working class sister, Ginger (Sally Hawkins). Jasmine’s move into Ginger’s cramped apartment, along with the refined airs that Jasmine puts on, don’t sit well with Chili (Bobby Cannavale), Ginger’s rough-hewn fiancé, a mechanic.

And, yes, there’s a gentleman caller. That would be Dwight (Peter Sarsgaard), a wealthy diplomat with political ambitions who meets Jasmine at a party and begins romancing her, unaware of her dodgy background. (Not to be a spoilsport, but wouldn’t he have Googled her immediately after the shindig if he was considering calling her for a date?)

Blanchett isn’t really doing Blanche here, or at least not Blanche as the classic, faded Southern belle. Rather, she’s playing what Blanche might be if she lived today and was part of the Upper East Side-Hamptons set but had started out poor, ended up rich and then lost it all again. It’s a tour de force performance, and one that doesn’t necessarily beg the audience to like her.

The problem with the film is that no other character in “Blue Jasmine” registers as strongly as Jasmine or seems nearly as well drawn by Allen. There’s no domineering, earthy, wisecracking Stanley here to balance out Jasmine’s Blanche.

There are amusing bits (Louis C.K. stops by briefly to pay enthusiastic suit to Ginger), but “Blue Jasmine” doesn’t really hang together. Characters flit in and out, and the whole feels only half developed.

Other than Blanchett’s arousing performance, the movie never gets its colored lights going at full intensity.