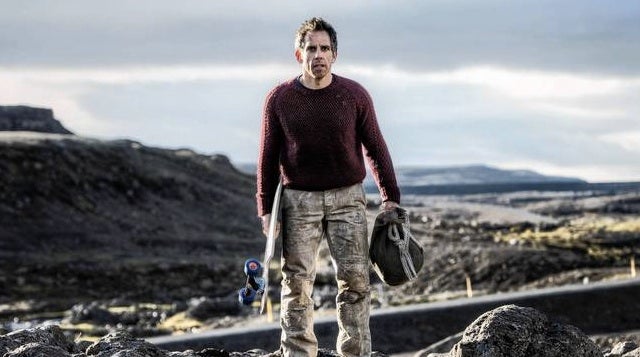 The reimagining of the story of a man living a life of quiet desperation – in this version as a photo archivist for Life Magazine – is directed and produced by Ben Stiller, who also stars in the title role. He escapes from his mundane surroundings through elaborate fantasies that find him doing otherworldly tasks such as working as an ice climber on a glacier.

Even in their unfinished form, the special effects are spectacular.

Despite the successful box office track record of Stiller, the face of Fox's "Night at the Museum" franchise, "Walter Mitty" is the kind of genre-blurring tale that represents a real gamble by Fox. In showing the footage at CinemaCon, the studio's hope is to inspire theater owners to buy in on the high concept now. A similar approach last year reaped huge dividends when "Life of Pi" was shown to exhibitors, and went on to top $600 million at the global box office despite its unorthodox plot.

As he took the stage in front of theater owners, Stiller made light of following Lee's act. "Yes, Ben Stiller and Ang Lee, the two of us are constantly getting compared," Stiller joked. "We're both Asian and were bar mitzvahed in Israel."

Producing "Walter Mitty,"  an adaptation of James Thurber’s 1939 short story, has bedeviled many of Hollywood's top talents over the years, including a litany of A-listers like Steven Spielberg and Jim Carrey. As a New Yorker profile of Stiller last year documented Fox initially balked at the project, fearing that at a cost of more than $100 million, "Walter Mitty" would never make a profit.

The studio ultimately acquiesced because of the company's successful track record with the star and promise of future collaborations to come. It's probably no coincidence that "Night at the Museum 3" will hit theaters in 2014.

Based on the footage that Stiller screened for theater owners, "Walter Mitty" will mark the actor's most ambitious project yet. The canvas is global in scope, with Stiller's Mitty hopscotching from the streets of New York City to the choppy waters around Greenland.

It's also filled with heart, as Stiller's Mitty falls for a co-worker played by Kristen Wiig. Sean Penn co-stars as a charismatic photographer whose lost photo sends Stiller on his foreign adventures, while Shirley MacLaine plays his mother.

Stiller promised a film that will be both epic and small when "Walter Mitty" hits theaters this Christmas. He said he was convinced that the project was right for him after screenwriter Steve Conrad ("The Pursuit of Happyness") told him, "inside the breast of every man beats the heart of an American hero."

To which he replied, "Steve, men don't have breasts."