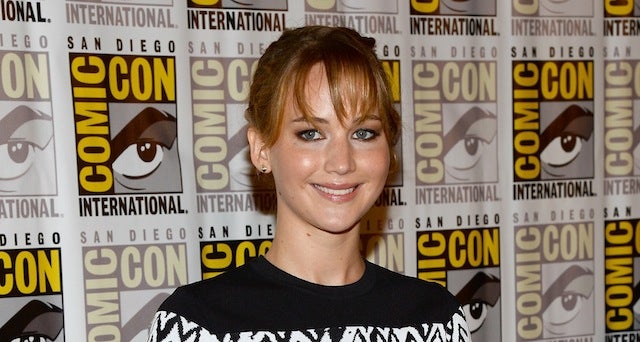 Jennifer Lawrence, Michael Fassbender and the stars of “X-Men: Days of Future Past” surprised fans at Comic-Con on Saturday, as Fox marshaled more than a dozen major Hollywood actors on stage in Hall H.

The plot chronicles X-Men as they travel through time and interact with past versions of themselves, pairing Ian McKellen and Halle Berry, stars of the earlier “X-Men” trilogy, with Fassbender and Lawrence, who anchored “X-Men: First Class. Bryan Singer, who directed “X-Men” and “X2,” wrote and directed “Days of Future Past.”

“The goal was to make a film that would bring the casts together,” Singer said at a press conference before the panel at Comic-Con. “Time travel or displacement would be tool we could use to do that.”

Also read: Jennifer Lawrence Is Blue and in the Buff Again for 'X-Men: Days of Future Past' (Photo)

Singer came on stage first and showed a sliver of footage from the movie, which will open in theaters next summer.

The one man who could play himself in both movies was Hugh Jackman because his character, Wolverine, is ageless. Jackman was on stage just moments earlier talking about "Wolverine," the upcoming film focused on the clawed mutant.

Jackman has now played "Wolverine" in six movies — "Days of Future Past" will be number seven — prompting "Wolverine" director James Mangold to compare the harmony of actor and character to Sean Connery as James Bond and Clint Eastwood as the man with no name.

Jackman tirelessly lauded the fans at Comic-Con, thanking them for their support and for elevating his career to new heights. Playing Wolverine in the first "X-Men" was his first role in an American movie, and the always gracious actor argued it was one of the greatest roles in all of cinema.

His own cast members contested that moments later when a fan asked them who their favorite "X-Men" character was. While Wolverine received three votes, Mystique (Lawrence) came out on top with four.

And a fraction of another. Patrick Stewart said he would play "any female character in any 'X-Men' movie because then I might stand the chance of winning an Academy Award."

Berry and Lawrence both took home statuettes after their initial turns in "X-Men" — though for other roles.

Many of the cast members commented on how it was working with people from the other movies, using that as an opportunity to tell some jokes.

"The best part about this movie has been knowing that at an earlier time in my lfie I was James McAvoy," Patrick Stewart quipped, to which McAvoy said he would be more than happy to grow up and be Sir Patrick Stewart.

Several of the actors on stage have been on other panels at the annual convention, including Peter Dinklage ("Game of Thrones") and Anna Paquin ("True Blood").

So what's it like directing that many different stars at once?

"I like ensemble films," Singer said. "I started with 'The Usual Suspects.' There's a lot of interesting people to cut to. The more the merrier."

If the number of roars is any indication, the crowd on Saturday agreed.