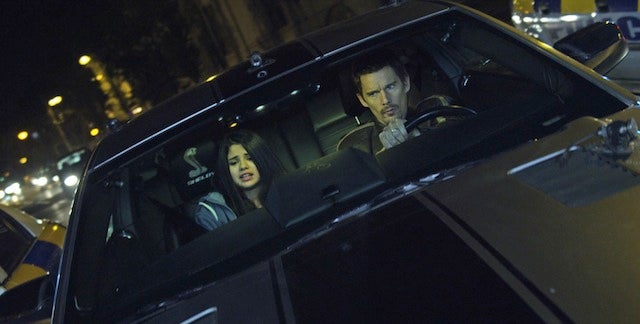 “Getaway” is a movie for people who think “Taken” is too complicated.

Perhaps more suitably titled “GoPro: The Movie,” director Courtney Solomon’s car-chase movie mounts a dozen cameras all over a Shelby Mustang Super Snake, cranks up the adrenaline and offers a first-person account of a wild goose chase to rescue a kidnapped spouse. Unfortunately bereft of any sense of spatial geography other than between the car’s driver and his unwitting passenger, “Getaway” is an endless, noisy montage of chases and collisions stitched together by perfunctory exposition whose most interesting character is quite literally a disembodied voice.

Ethan Hawke, aiming to earn the title of Summer 2013’s Hardest Working Actor, ditches relationship peccadilloes and undercooked home-invasion scenarios to play Brent Magna, a disgraced racer who arrives home to discover that his wife has been taken hostage. Receiving instructions to steal a car that’s custom-designed for his driving skills, Magna soon finds himself plowing through populated areas and evading the authorities at the behest of a mysterious stranger (Jon Voight).

But after a young woman (Selena Gomez) tracks him down asking him to return what turns out to be her car, Magna begins to realize there is something larger afoot than petty errands, and formulates a plan to rescue his wife while turning the tables on her kidnappers.

Mercifully, the film wastes no time introducing the characters or setting up their world; following a flashback scene in which Magna’s wife (Rebecca Budig) is apprehended while decorating their Christmas tree, the driver is in the car and on the asphalt. This streamlined approach unfortunately proves to be an obstacle to believability, especially after Gomez’ character shows up, and as the story needs, she is incapable of increasingly sophisticated technological feats.

That the film covers all of its bases in setting up the inescapability of Magna’s situation is admirable, but its thoroughness becomes a problem later when he’s conspiring against his wife’s kidnappers. (If you point out that The Voice is constantly listening to them via a hidden microphone and do nothing to remove it, he’s probably still privy to your conversations — especially if you’re planning something.)

That said, its screenwriting transgressions might be forgivable if at the very least the driving footage was impressive — or even, say, comprehensible. But even with cameras on every corner of the car, inside and out, Solomon seems incapable of assembling a sequence during any time of which the audience can see where Magna is driving, how many people are pursuing him and how he plausibly could escape them without totaling his beautiful ride.

With the exception of one unbroken shot where Magna and another vehicle are locked in pursuit, which quite frankly is stunning, there is nothing to distinguish any of the chases from the others, especially since he’s assigned to do virtually the same thing each time — namely, attract the police, then evade them.

Hawke commits to the intensity of Magna’s quest with all of the conviction of a man en route to cash a desperately needed paycheck, while Gomez demonstrates that her performance as the group lightweight in “Spring Breakers” was no fluke — she truly possesses no discernible depth or substance. (She is, however, believably annoying.)

As The Voice, meanwhile, Voight seems to be parodying “Eyes Wide Shut” actor Rade Serbedzija’s actual eastern European accent, but at least he seems to be having fun with the role.

But the film’s one unique achievement is in avoiding any similarities to either Sam Peckinpah or Roger Donaldson’s adaptation of Jim Thompson’s novel “Getaway,” and yet managing to be even more derivative than if it were a third one.

With the “Fast and Furious” films, Jason Bourne and Liam Neeson already occupying lanes, cinematically speaking, “Getaway” embarks on a race it’s already lost, mostly because it can’t seem to figure out where the road is in the first place.