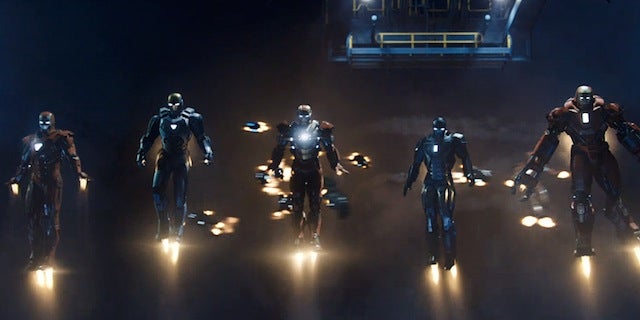 Those less generously inclined might point out that Black's villains tend to be unmemorable, with world-shaking schemes that don’t make a lot of sense, and his climactic battles tend to throw in not just the kitchen sink but also the trash compacter, the coffee maker and even the lawn mower for good measure.

Those flaws, too, rear their heads in the film, but if you’re the sort of viewer for whom Black’s strengths more than make up for his weaknesses, the best bits of “Iron Man 3” will make the lesser stuff worth forgiving — or at least worth enduring.

This sequel sees billionaire inventor Tony Stark (Robert Downey Jr., who previously teamed with Black to great effect in “Kiss Kiss Bang Bang”) beloved by the world after his planet-saving heroics at the climax of “The Avengers.” He’s barely able to enjoy the adulation, however, as he’s been plagued with insomnia and anxiety attacks ever since.

Compounding his stress is a global terrorist known as The Mandarin (Ben Kingsley) — the original comic-book character, as the name suggests, was a Fu Manchu-ey, half-Chinese villain bent on world domination, but to avoid offending the world’s biggest new movie marketplace, he’s now a bin Laden-esque terrorist with a penchant for committing nefarious deeds and then boasting about them on video.

Also popping up is rival scientist Aldrich Killian (Guy Pearce), who Stark once cruelly shrugged off at a Y2K celebration and who has developed a “brain upgrade” called Extremis, which can rearrange the DNA to repair broken bodies but which also has more nefarious purposes as well. The process tends to be unstable, leading to his subjects occasionally exploding in rather nasty ways.

Black gives Downey reams of quotable, hilarious dialogue (“Kiss Kiss” fans will love the fact that the film opens with narration that he begins and then starts over); Stark also has relationships and interactions with both returning characters (Gwyneth Paltrow as love interest Pepper Potts, Don Cheadle as the Army officer who controls War Machine, now rechristened Iron Patriot) and new ones (notably Ty Simpkins as Harley, a tech-minded youngster who helps Stark when he needs it most) that feel specific and thought-out. Stark’s ongoing refusal to treat the kid like a kid, in fact, provides some of the movie’s best moments.

Unfortunately, the film doesn’t devote as much energy to Killian, and the hero/villain imbalance undercuts the many joys of “Iron Man 3.” The rules of Extremis, for instance, are never really explained, so we’re not quite sure when the process is going to backfire on its users, or what the parameters of their new abilities are. (The steps of Killian’s master plan don’t entirely make sense, either.)

But again, if you’re willing to work around the movie’s shortcomings, there are plenty of moments to savor, from the excellent selection of holiday music (from Herb Alpert and the Tijuana Brass, Dwight Yoakam and Joe Williams, to name a few) to a terrific array of character actors, including Adam Pally of “Happy Endings” (as a Stark fanboy), Dale Dickey and Rebecca Hall (as a past conquest of Stark’s whose botanical discoveries play a key role in developing Extremis).

One of the unusual aspects of the “Iron Man” series is that it’s given Gwyneth Paltrow one of the most appealing and proactive characters in her career, but this chapter doesn’t quite know what to do with her, simultaneously throwing her into the action (she gets to wear the armor for a few scenes, becoming a de facto Iron Maiden) while also making her exceedingly helpless for much of the film’s slam-bang finale, trapped under rubble and suspended from a crane in true “Perils of Pauline” fashion.

You could power a whole movie out of Paltrow and Downey’s romantic chemistry, but too often their charisma gets buried in the International Box-Office Behemoth Machine that “Iron Man 3” becomes when the sharp dialogue gets pushed aside in favor of the ka-blams. Black occasionally tries to make political points about environmentalism and distracting the public with boogeymen while the real bad guys operate in the shadows, but they get lost among the explosions.

Not that the action sequences aren’t often top-notch: in one particularly breathtaking sequence, Iron Man rescues a dozen people who have been blown out of Air Force One by snapping them up one by one and forming a human chain. No matter what’s falling out of the sky or catching fire, the movie never lets us forget about the people inside those suits of armor.

While “The Avengers” showed how well a film could serve the twin masters of Smart Characters We Care About and Let’s Blow Up the Planet, “Iron Man 3” doesn’t nail the balance quite as well. But those smart characters are there, and they’re given just enough to do and say to make the movie entertaining for viewers who are more interested in the man than the iron.