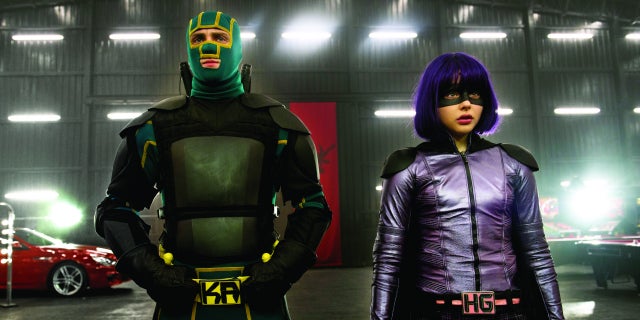 “I Hate Reboots,” says the shirt worn by teenage comic-book obsessive Dave (Aaron Taylor-Johnson) in “Kick-Ass 2”; it’s a worthy sentiment that manages, at least, not to be hypocritical – after all, it’s not like he’s wearing a shirt that says “I Hate Lazy, Cynical Sequels,” which is exactly what this film is. While the 2010 “Kick-Ass” was far from perfect, it did feel like a movie that understood the power fantasies of teenage boys with deadly accuracy. If the original felt like it was designed for adolescents, however, this follow-up feels like it was made by an adolescent, one with a whopping case of ADHD.

In telling the ongoing saga of Kick-Ass (Dave’s would-be-superhero identity) and his fellow costumed vigilantes and villains, “Kick-Ass 2” is all over the map, awkwardly seguing between over-the-top action, comic-book satire and coming-of-age movie; the results are not unlike an eclectic comic-book collection that’s been submerged in water and turned into one unreadable block.

Since the last movie, Dave has hung up his green-and-yellow costume and returned to his humdrum life as a high-school senior — and he’s bored out of his mind. So when he figures out that freshman Mindy (Chloë Grace Moretz) is ditching class to continue training secretly as Hit Girl, he begs her to become his mentor, even though their combat sessions have to be kept secret from her guardian Marcus (Morris Chestnut).

Meanwhile, on Long Island, the bratty and petulant Chris (Christopher Mintz-Plasse) still wants revenge against Kick-Ass for blowing up Chris’s mobster father. When Chris’s mother dies — in a tanning-bed accident — he's free to build an evil army to enact his vengeance.

When Marcus catches up to Mindy’s double life, he forces her to engage in normal high-school activities, which winds up putting her in the crossfire of a cadre of mean girls more fearsome than any supervillain. And while she’s navigating the cliques, Kick-Ass joins up with Justice Forever, a penny-ante Justice League led by former mob enforcer Colonel Stars and Stripes (Jim Carrey).

R-rated mayhem ensues, with skulls splattering open amidst the wisecracks, but the blend of ultra-violence and dark humor feels forced and inorganic this time around. Writer-director Jeff Wadlow (“Never Back Down”) never shows the skill that Matthew Vaughn mustered last time, plodding through a series of hackneyed characters and contrived events. His script, based on the comics by Mark Millar, even throws in extraneous narration, the telltale sign of a writer who’s in over his head.

There are a few aspects of “Kick-Ass 2” that work, from John Leguizamo‘s deadpan manservant to Olga Kurkulina as Mother Russia, a muscular and scantily-clad villainess who looks like she stepped right out of the pages of Howard Chaykin’s stylish and sardonic “American Flagg!” comics, but too much of the film winds up focusing on whiny teens and parents who just don’t understand why their kids want to put on masks and bludgeon strangers in the middle of the night.

The first “Kick-Ass” was a balancing act of challenging material that, more often that not, stayed aloft on the highwire; “Kick-Ass 2” comes crashing down to Earth over and over again, soiling itself for good measure.