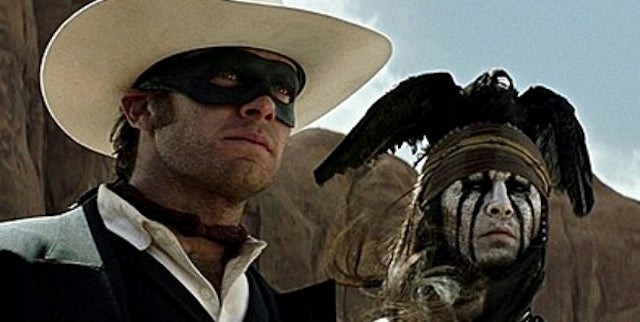 The new film "The Lone Ranger" seems very reluctant on the subject of its own hero, a character who was exceedingly popular for decades on radio and on television. It's one thing to give the faithful sidekick top billing, when that sidekick is played by Johnny Depp, but the film feels constantly torn between deconstructing the legend and presenting it in a straightforward manner.

Since it's impossible to simultaneously sacrifice and worship a sacred cow, "The Lone Ranger" feels schizophrenic, a state of affairs that would be forgivable if it delivered as a post-modern comedy or as an exciting Western or even as an exhilaratingly brainless piece of summer entertainment.

With director Gore Verbinski, the man behind the first three "Pirates of the Caribbean" movies, at the helm, "The Lone Ranger" is none of those things. The results are both joyless and seemingly endless, as its two-and-a-half-hour running time stretches out like a desert horizon barren of shade or water.

Like most reboots of a familiar pop-culture character, this one's an origins story, told in flashback by a wizened Tonto (Depp), reduced to working in a "Wild West" sideshow in 1933 San Francisco. His story takes a wide-eyed lad (Mason Cook) – and us – back to the days when the railroads were just beginning to cross the country.

Lawyer John Reid (Armie Hammer) returns to this untamed territory armed with a snappy suit and a copy of John Locke's "Two Treatises of Government," although his brother Dan (James Badge Dale, also currently appearing in "World War Z" and "Iron Man 3") prefers a gun and badge as a member of the Texas Rangers.

Also on John Reid's train is the nefarious Butch Cavendish (William Fichtner), who ups the ante on his villainy by consuming the hearts of his enemies; locked up alongside him is Tonto, who has been pursuing Cavendish because he believes the white man is actually the Wendingo, a beast who must be stopped before he throws nature out of balance.

John Reid is deputized by his brother to pursue Cavendish after he escapes, and when the Rangers are ambushed, John is the only survivor, although Tonto, who finds the slaughtered search party in the desert, thinks John has died and returned to life. To maintain the illusion that there were no survivors, Tonto encourages John to wear a mask as the two continue to pursue Cavendish and his henchmen.

There's intrigue (Tom Wilkinson plays a railroad man dripping with nefarious intent), romance (Dan's wife Rebecca, played by Ruth Wilson, has always had a thing for John) and suspense (the bad guys kidnap Rebecca and her son, and there are runaway trains and bombs under bridges), not to mention off-screen genocide and spirit animals and Helena Bonham-Carter as a madam whose artificial leg hides a firearm and Barry Pepper impersonating Richard Mulligan impersonating George Custer in "Little Big Man."

What there isn't, amongst all these characters and incidents and plot twists, is much fun. The running gags (everyone greets the title character with, "What's with the mask?") get old fast, the talented actors often feel crushed by the material, and the gigantic set pieces don't deliver the awe and wonder you would expect.

It could be argued that most of the computer-generated action extravaganzas of the last several decades represent filmmakers trying desperately to remake "Raiders of the Lost Ark" over and over again. And for what many of these films lack in originality, they make up for in bravura and sheer adrenaline – "Fast and Furious 6" and "White House Down" are both utterly silly, but when things start blowing up and characters defy physics to save themselves and each other, you gasp and you feel that flutter of excitement that is the raison d'être of movies like these.

In "The Lone Ranger," however, I sat back and thought, "Wow, two trains chasing each other. Impressive," but I never twisted around in my seat, feeling each close call and internalizing every near-miss.

When "The Lone Ranger" finally becomes a Lone Ranger movie well into the third act – booming Rossini score, charging horse and all – you get a few seconds of excitement, and you can see how perfect a choice Hammer was in portraying this all-American hero. But that moment is over all too quickly, and then we're back to the bloated spectacle.

Whether or not Depp's casting actually qualifies as redface – the actor claims some Native American heritage in his ancestry – the film has been designed for Tonto to ironically undercut our hero at every turn. We are told "kemo sabe" means "wrong brother," since Tonto thinks it's Dan and not John who should have returned from death to get revenge on Cavendish.

Depp lands the occasional one-liner, but his presence in the movie actively undercuts our investment in the Lone Ranger as a character, much less as a hero. Imagine Christopher Nolan casting Joan Rivers as Alfred in the "Dark Knight" movies so she could follow around Batman and make jokes about his ridiculous outfit.

"The Lone Ranger" is a drag as an action movie, it's not funny in its attempts at self-parody, and it feels like a Western made by people working off a checklist of tropes without ever really understanding the genre. Verbinski and his writers have taken a promising idea and put a silver bullet in its head.