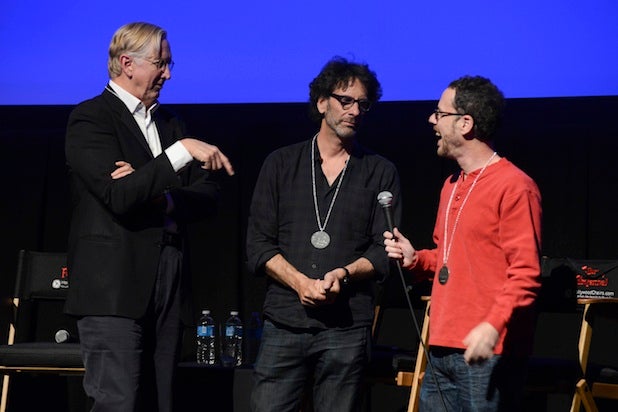 T Bone Burnett and Jack White are planning a nationwide tour celebrating the music of "Inside Llewyn Davis" and the growth of new acoustic music, Burnett told the audience at a Telluride Film Festival tribute on Saturday.

Appearing at an unusual joint Telluride tribute that honored Joel and Ethan Coen and their four-time music supervisor Burnett, the musician and producer said that after an upcoming "Llewyn Davis"-themed tribute concert at the New York Film Festival, he hopes to take the concept on the road — a la the tour that followed the Coens/Burnett collaboration "O Brother Where Art Thou."

That collaboration sold eight million soundtrack albums and won a Grammy for Album of the Year.

"I'm just gonna announce this," said Burnett in Telluride. "Jack White and I are on the board of the Sound Preservation Foundation with the Library of Congress. We're doing the same thing with sound preservation that Scorsese has done with films.

"The benefit we're doing in New York, Jack and I want to take it out [on a] tour benefitting that with a lot of these cool young [acoustically-based] musicians maybe nobody knows. Maybe it can be one of those things where the whole is greater than the sum of its parts, and the water rises and all the boats rise with it."

The initial concert, hosted by Burnett and the Coens at New York's Town Hall on Sept. 29, will feature Black, Marcus Mumford, the Avett Brothers, Patti Smith, Joan Baez, Connor Oberst, Gillian Welch and Dave Rawlings, Colin Meloy of the Decemberists and Rhiannon Giddens of the Carolina Chocolate Drops, among others.

The Coens/Burnett tribute was tied to "Inside Llewyn Davis," a road movie about a down-on-his-luck folk musician (inspired by Dave Van Ronk and played by Oscar Isaac) in early '60s Greenwich Village. The film aims to make "the great folk scare" of the early '60s into a cinematic tune moviegoers will want to hear in the early '10s.

Burnett first worked with the Coens on "The Big Lebowski," arguably the biggest cult movie of the last 20 years. The collaboration began, he said at the tribute, because he did the initial wooing.

"It was the first and only time in my life I ever cold-called somebody, just because it seemed like I've got to either talk to these people or get them out of my head," he said. "In 'Raising Arizona,' when 'Ode to Joy' by Pete Seeger came on, done by a guy I'd known in the '60s named John Crowder, I said, 'OK, I have to call these people up, because obviously we went to school together or something.'" The folkie performances in "Davis" are all live on camera, even though pre-recordings were done months ahead of time. "Oscar Isaac would take these recordings away for five months and work and work until he was able to get on the set with cameras everywhere, where they're spending hundreds of thousands of dollars, and relax and play the song," said Burnett.

Burnett also lauded Isaac's chutzpah in "playing a character that's not trying to make you love him all the time" – and a character that certainly doesn't get much love from the other characters in the movie, in or out of show business.

"What was interesting to us here was not the maybe more common thing, which is a success story about a musician or triumph over adversity," said Burnett. "It was more, 'Well, what about the guy who's not Bob Dylan and is never gonna be Bob Dylan, but is a very interesting and good musician?'

"People who are very talented at something but aren't 'successful' in how the rest of the world perceives them – that's the universal story we wanted to tell, specifically in the context of music."

If Burnett's next project will be to take that music on the road, the Coens said they are planning some highly unusual, nostalgic wrinkles for what they do next.

"They used to ship big, important Hollywood movies with an overture reel, with no picture and an overture when you're going into the theater," said Ethan Coen. "We're hoping the next movie we do, which is kind of about an opera singer, and which we're hoping will also have an intermission, we can send an overture reel."

Added Joel, "We thought, 'Let's write a movie that has an intermission, because we haven't seen that in a while.' Ethan said to me while we were [writing] it, 'You know, traditionally, movies with an intermission, you come back for the second half and it's not as good as the first half. So we should try to work that into the screenplay.'"

"You've got to observe the forms," explained Ethan.