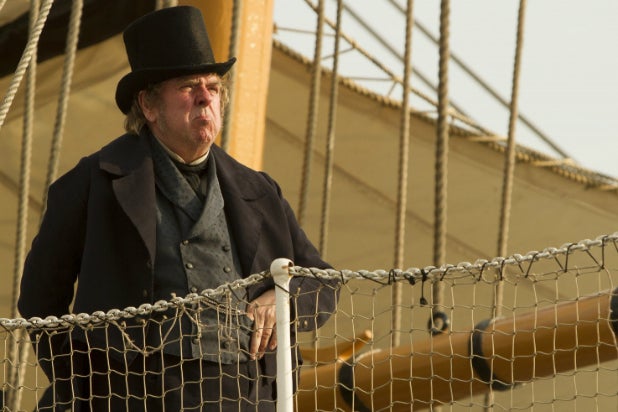 With Mike Leigh‘s “Mr. Turner,” a perfect union of film biographer and subject has landed at Cannes.  In his film about J.M.W. Turner, an English Romantic painter of landscapes who caught the subtle shimmer of light on water in ways the world had never seen, the director known for capturing the subtle grace of human behavior has delivered a masterpiece of his own.

After decades of signaling that he had this kind of film in him, the usually humble and introspective Leigh has at last created the kind of portrayal that works both as biopic and self-portrait.  Digging into the genesis of genius, the solitude of inspiration, the madness of the muse, Leigh reveals reasons that help explain why  being a great artist and a great human aren’t always compatible.

Timothy Spall plays Turner, a grumbling discombobulated artist whose only abiding interest is in looking at light and finding innovative ways to paint with it.  He is compelled to sketch anything he sees that ignites his fancy, no matter where the impetus comes from or how little sense it makes to anyone else.

He does what many of the masters have done for centuries but particularly his peers and pioneers in the early years of the impressionism movement: chase the elusive vagaries of light and let it take us to unpredictable places. The effect with Turner’s work were landscapes imbued with grave emotion, haunting imagery and sublime beauty, much like this film, every frame of which seems touched by a painter’s hand.

Spall’s Turner is not a good man, and he isn’t concerned very much with being one, though certainly his betrayals of women and neglect of his children weigh heavily somewhere in his head. He has far bigger things on his mind, however. His art was everything. Women would drift in and out to help wash brushes or to provide him with comfort or sexual relief, but for him there was never much more to it than that. He appeared to have little respect for most people, neither colleagues nor close relatives, and preferred the company of his own father for 30 years his life.

Turner hewed closely to the reality of whatever he painted, and Leigh has hewed just as intimately to the discomforting details Turner’s life, only gradually expanding our view of the man to reveal the texture of the raw canvas underneath.  In this way, Leigh’s film very cleverly does what Turner’s paintings acheived.  This doesn’t become apparent until the film reaches its last memorable moments. The cross, grousing, barely audible, barely tolerable Turner was but a medium, it seems, for delivering something much bigger than he could ever express in words — much bigger, in fact, than any facet of his singular life.

As is usual with any Mike Leigh film — a style unique and trademarked by now — his ensemble is a collection of remarkably adept actors who know their characters so well they could stay in character for weeks, continually improvising, as they often do.  Mr. Turner feels more structured than some of the director’s previous efforts, more “Vera Drake” than “Another Year.”

Although Leigh said in the press conference that this film is no different from his others in terms of how he went about writing it, organically drawing on the internal lives of the actors who help create their own characters. That is perhaps why this never feels like a film at all but rather a diorama you’re stepping into, with painstaking attention to detail right down to the color of Spall’s crooked tooth in the back of his mouth, or the tiny threads that fray the edges of a badly hemmed garment.

Lesley Manville is once again memorable as a woman who teaches Turner about magnetization and prisms.  Dorothy Atkinson plays Turner’s mistress, Hannah Danby. Though Turner refused to marry any woman he was constantly seeking the attention of young women and prostitutes while also shacking up with widows.  Marion Bailey plays one of those.

As a gruff and often caustic Turner, Spall has never been better. Only Mike Leigh would cast such an actor in the lead, to show a vital, sexual, self-centered man who seemingly has no self-awareness as to the pain he inflicts on others, or the damaging effects his eccentricities have wrought.  Spall plays the young, middle-aged and dying Turner thoughtfully, though never losing sight of Turner’s own preoccupations: this was a man obsessed with capturing the glory of God through shimmering light and ephemeral snapshots of life.  From the tragic to the erotic to the delightful, he caught it all with his eyes and his brushes, everywhere he went.

With gorgeous, rich, vibrant art direction and probably the best cinematography you’ll see all year, Mr. Turner is filmmaking old school, presenting a dazzling array of visual delights that don’t go anywhere near a green screen (or perhaps some of them do, but if so, you never see the seams).

Screening on the second day of the Cannes film fest, “Mr. Turner” is very likely a candidate for the Palme d’or, which Leigh won has previously in 1996, with “Secrets and Lies.” Meditative and deliriously beautiful, “Mr. Turner” is both a love letter to Britain’s greatest painter and a magnum opus for Leigh. It serves as an artist’s confession and apology that conveys a tough message: to make art and tap into genius often comes at the expense of everything else. We are left with an artist’s legacy, sometimes at the expense of their humanity.  A fair trade when you consider the alternative.