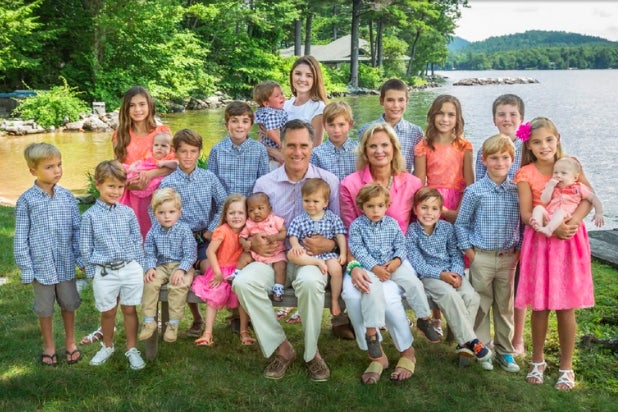 MSNBC host Melissa Harris-Perry concluded the “What’s So Funny About 2013?” segment of her Sunday show with a chorus of laughter at the black grandson pictured in former Massachusetts Gov. Mitt Romney’s family Christmas photo. The chuckles were directed at baby Kieran – who was adopted by Romney’s son Ben and his wife Andelynne in September.

“And that little baby, front and center, would be the one,” Glenn said.

Comedian Dean Obeidallah joked that the baby is a token.

“It really sums up the diversity of the Republican party and the RNC, where they have the whole convention and they find the one black person.”

Conservative blogs on Monday roundly criticized MSNBC and the panelists for the segment. Commentator Caleb Howe wrote tongue-in-cheek on The Right Scoop: “He’s not a child adopted by loving parents prepared to provide him with a better life in keeping with the family’s values. Nope. He’s just a token. A punchline, not a person.”

“It’s funny because Romney is white and his grandson isn’t, which is obviously hilarious. Because as everyone knows, the races should not mix,” Howe added [emphasis original].

Republican Arizona Sen. John McCain, who ran for president in 2008, also has an adopted child of a different race. McCain’s wife Cindy brought daughter Bridget home after a cyclone relief trip to Bangladesh in 1991.

Glenn acknowledged the controversy on Twitter Monday but fell short of apologizing, instead blaming the producers of the show for springing the photo on her and the panelists.

She wrote in response to a critic, “”Really? You think I’m a producer on the show? You think I chose that photo & new [sic] it was coming?”

“Yes, I sang the song. There are many children in the pic & only 1 black child. I don’t see that as mocking or attacking the baby.”

Harris-Perry and other panelists have thus far remained mum.

Ironically, the segment ends by teasing the next block, an annual “‘Look Back in Laughter’ tradition of asking ‘Hey – Was That Racist?'”