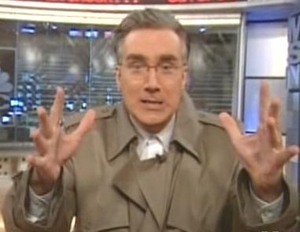 An identity crisis reigns at MSNBC. The network was sure it had found a niche when the ratings finally climbed out of the 25,000 viewer range this year. Who was the savior? None other than that master of the elegant put-down, host Keith Olbermann, combined with the pit bull interrogations of Hardball-man, Chris Matthews.

In the Year of Obama, this one-two punch seemed to put NBC-Universal's also-ran cable network on the map. It gave it an identity. MSNBC would be the foil to the right-leaning Fox. Viewers would tune in to a leftie, Hillary-hating network. All those HuffPo bloggers would have a friend on the cable air-waves. The journalism aspect of it didn't matter so much in the face of hard facts for Olbermann: ratings reaching beyond 1 million viewers.

The cable network seemed to confirm its embrace of its new left-wing status just three weeks ago, when it yanked veteran anchor Dan Abrams off the air in favor of Olbermann's protege, Rachel Maddow.

But now, what's this? As Brian Stelter reports in tomorrow's New York Times, it is neither Olbermann nor Matthews who will anchor news coverage of the debates and election night. Instead it is the vanilla stylings of David Gregory, whose daily show at 6 pm, "Race to the White House," has been a decided snooze.

What gives? It turns out that NBC is not so comfortable showcasing two big personalities with clearly defined political sympathies. More to the point, the tension between the two anchors had spilled out into the open, and led to questioning by the more traditional news staff at NBC.

Writes Stelter: "The coverage frequently descended into on-air squabbles between the anchors, embarrassing some workers at NBC’s news division, and quite possibly alienating viewers."

Two noted turning points in the past week: Brian Williams on the Jon Stewart Show, was asked by the host about the squabbling at MSNBC. Willliams blanched, squirmed, smiled broadly, and asked, "Are you serious?" Then there was that surprising moment at the Republican National Convention when the delegates actually began chanting "NBC, NBC," when veep nominee Sarah Palin took aim at the media.

It is difficult indeed to hew to old-fashioned principles of bias-free coverage when the ratings favor entertainment and spin. Here's my favorite quote from the Stelter piece: “MSNBC is behaving like a heroin addict,” one senior staff member observed. “They’re living from fix to fix and swearing they’ll go into rehab the next week.”