The Oscars want their MTV.

Hamish Hamilton has been named director of the 82nd Annual Academy Awards, a sign that first-time producers Bill Mechanic and Adam Shankman may push the Oscars further into the musical performance-heavy territory that the telecast found critical and ratings traction with last time around.

The 43-year-old Brit has steered the stylish and freewheeling MTV Video Music Awards going back to 2006, and this year helmed “Neil Diamond: Hot August Night/NYC” and “Be the Change Inaugural Ball.”

“Hamish is a first-rate live-show director who will bring enthusiasm, experience and a fresh eye to the table,” said Shankman in a release. “He’s also a master of working with all of the latest technology in television production, which speaks to the kind of cutting-edge show Bill and I are planning.” 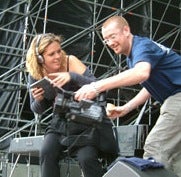 Hamilton  also directed “The Victoria’s Secret Fashion Show” five out of the past six years and has several live musical and live awards telecasts to his credit. He has worked with such diverse artists as U2, Evanescence, Peter Gabriel and Eminem.
Together Shankman, a choreographer and one of the judges on “So You Think You Can Dance?” and director of the film “Hairspray”; and Mechanic, the producer of “Coraline” and former chairman of Fox, chose Alec Baldwin and Steve Martin as co-hosts earlier this month.
Hamilton becomes only the fifth man in the last 38 years to direct the Oscar telecast. Beginning in 1972, Marty Pasetta handed the job for 17 consecutive shows, largely inventing the modern Oscar show before he was bounced for being a little too imperious.
Margolis took over for eight years, beginning in 1989; Louis J. Horvitz followed with a dozen shows. Roger Goodman directed the Oscar show earlier this year.
He apparently was chosen out of four finalists who spoke to Mechanic and Shankman. (Margolis was in the running; as were Goodman and veteran TV director Gary Halvorson.)
“Adam and I know that having Hamish at the helm will give us the right style and energy for the show we want to produce,” said Mechanic. “And his approach definitely won’t feel like ‘business as usual.’”
x
Looks like you're enjoying reading