But you already knew that. Below are five things TheWrap witnessed from inside — and outside, so much going on outside — the Prudential Center.

Water, Water Everywhere – But Not a (Clean) Drop to Drink?

When we arrived at the MTV VMAs, we were greeted(?) by a couple dozen protestors representing the Newark Water Coalition.

The group’s peaceful march forced police to shut down Edison Street in Newark, which is where the press parking was. Cops wouldn’t even let these reporters walk down Edison Street to get to the press check-in. One of us ended up getting our tickets passed through a slit in some parking lot fencing by an MTV media liaison doing their best under tough circumstances. Meanwhile, enterprising members of the media who already had their tickets whipped out their cameras and went to work.

Among the Newark Water Coalition’s chants? “What do we want? Clean water! When do we want it? Now!”

See the crowd gathered below. 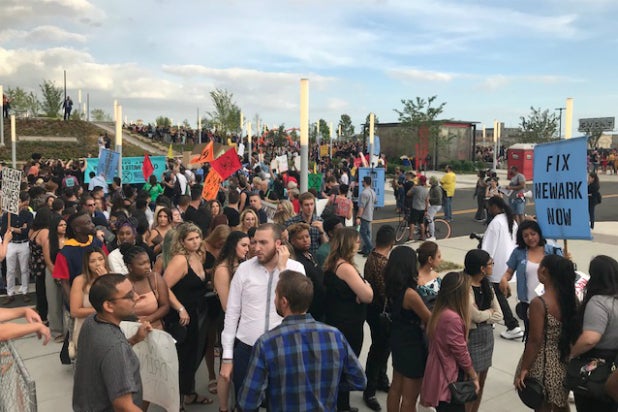 Watch TheWrap’s video footage of the protest below. Apologies for the vertical shot, it was the easiest way to hold the cell phone while climbing a fence.

The Newark Water Coalition itself has some better stuff here.

Thanks for Coming, Now Give Us Your Cell Phone
You know all those young, good-looking people with the amazing floor seats, jumping and dancing with boundless enthusiasm for every single performance? Yeah, they’re cast for the role of “VMAs audience member.”

The casted audience inadvertently added to the congestion outside the venue as they were shuffled and shepherded into long lines that snaked near the protestors. They, unlike the press and other attendees, had to put their cell phones in time-locked Yondr pouches.

Greg Virga, who works for Michael Kors, modeled the night’s hottest — and most annoying, for these millennials — accessories for us. 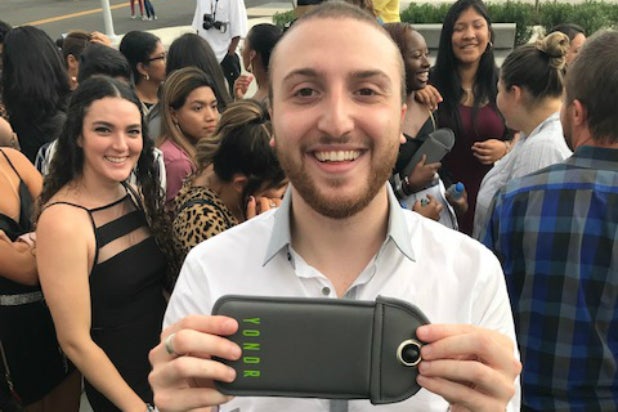 Where in the World Are the Jonas Brothers?
The JoBros really phoned it in for their performance but in, like, a good way. The New Jersey natives paid tribute to their state by performing live at the Stone Pony in Asbury Park, where they spilled out onto the sidewalk singing and dancing. Their medley of “Sucker” and “Only Human” was broadcast onto the big screens in the arena as well as tiny screens in homes around the country.

Amazingly, they made it back to the Prudential Center in time to accept an award later in the night.

Prudential Center ushers were under strict orders to not let audience members walk down to their seats during live performances. That was enforced during the early part of the Jonas Brothers’ performance, until everyone realized they were, you know, 45 minutes away.

Move That Butt! Move That Butt!
Lizzo, a firebrand singer known for her self-love anthems and DGAF attitude, brought the house down with her performance, which mashed up her hit songs “Truth Hurts” and “Good As Hell.” Throughout her set, she danced in front of a massive inflatable butt, but what audiences at home couldn’t see were the stagehands whose jobs it was to dance behind it.

The wiggles and jiggles of the big balloon booty were all thanks to black-clad employees standing behind it, shaking it for the crowd. Imagine if that was your job…? What would you tell your mother?

Shawn and Camila (Mostly) Keep the PDA to Their Performance
We all knew Shawn Mendes and Camila Cabello would have a steamy performance of their collaborative smash “Senorita.” No, really — we all knew. Entertainment Tonight accidentally published their review of the “flirty” duet and “killer choreography” days early. Mendes and Cabello have been on a public PDA tour, making out for everyone (with a camera) to see for weeks now.

And yet, they didn’t kiss during the VMA performance, leaving fans — like Joe Jonas and Sophie Turner — wanting more.

Unfortunately, from our seats, we could see Cabello and Mendes after the partition came back down after their rendition, leaving them alone backstage and guess what? They didn’t kiss then, either! Unfair, but what are you gonna do?