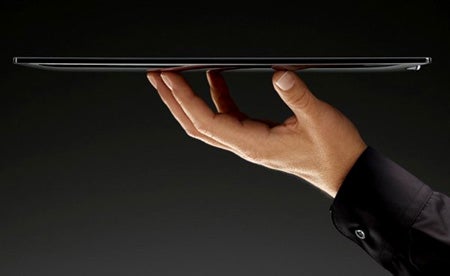 At last week’s Magazine Innovation Summit in New York, two themes dominated the conversations: paid content – with most publishing executives agreeing, essentially, that it’s time to get paid something for the content they publish online; and why technology – specifically e-readers – could help them figure out how.

During one panel, magazine executives were practically salivating at the potential of e-readers. (As moderator Time editor-at-large Josh Quittner quipped: “When Apple’s device is announced, there will be a mass ascension and everyone will go to media heaven.”)

One of those e-readers is being developed by a company called Plastic Logic, and today they announced its name – “Que” – and the date it’ll be unveiled: January 7, 2010, at the Consumer Electronics Show in Las Vegas. (Booth number 11840, if you must know.)

The Que’s e-ink screen is 8.5 x 11 inches, less than a 1/3 inch thick and will be WiFi-enabled via AT&T’s 3G network, Plastic Logic says. It will be able to handle PDFs, Word and Excel documents, too. The company says the battery “can last days, instead of hours.”

One detail that’s missing, as this gadget blog points out, is the price.

Amazon’s Kindle is currently retailing for $279. Sony’s e-reader sells for $199.