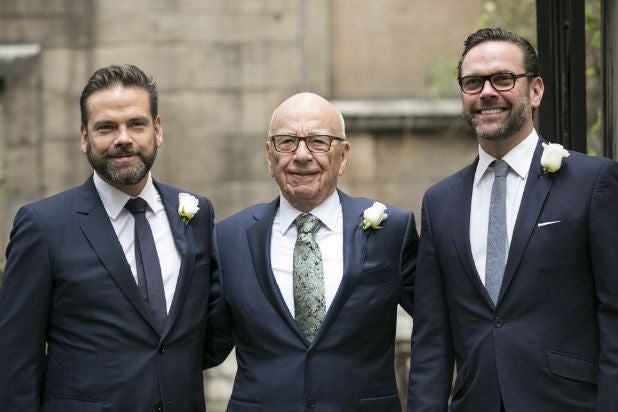 Even as they have weathered turmoil at their Fox News Channel, Rupert Murdoch and his sons James and Lachlan saw their pay increase significantly in 2016, according to a filing that 21st Century Fox made with the SEC on Friday morning.

The numbers showed that executive chairman Rupert Murdoch made $34.6 million, compared to the $27.9 million that he brought in during fiscal 2015, when he also was CEO of the company. That’s a 24 percent increase.

James Murdoch, who is now the CEO, took home $26.4 million, compared to the $15.1 million that he made in 2015 when he was the COO. Meanwhile, Lachlan Murdoch earned $23.7 million in his first year as executive chairman.

The company said that the Murdoch family’s additional cash comes mostly from a change in pension value and non-qualified deferred compensation earnings.

It has been a fraught year for the Murdochs and their company, as former Fox News CEO Roger Ailes stepped down amid a sexual harassment scandal. James and Lachlan are widely believed to have taken a significant role in deciding to launch an internal investigation against Ailes, while their father reportedly wanted to support the disgraced TV exec through the lawsuit that Gretchen Carlson filed against him. Rupert temporarily took over control of Fox News before naming Bill Shine and Jack Abernethy co-presidents.

The company’s annual meeting of stockholders is scheduled for Nov. 10.