"Free is the new black," said musician and lecturer Martin Atkins in a speech this afternoon kicking off the music festival at SXSW.

Atkins’ discussion of the changing of state of the music industry connected to many of the ideas about audience interactivity discussed during the film and interactive components of the conference. (Although the film festival technically concluded yesterday, screenings run through the weekend.) 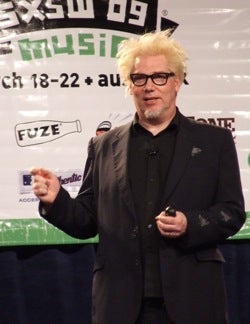 As hundreds of musicians crowded into the Austin Convention Center and disparate rock sounds blasted out of nearly every street corner in the downtown area, Atkins picked up on the increasing trend of self-marketing professional musicians. "Everybody is doing it," he said. "The whole idea has changed."

Striking a progressive tone — and inserting a vulgarity or three into nearly every statement — Atkins called for a moratorium on the rock-label approach of the 1970s. "The old model is dead," he said. "Before we start thinking outside the box, here’s my question: Where’s the f—ing box?"

Atkins praised Prince for being "ahead of his time" by experimenting with mobile initiatives and other ways of reaching fans through new media. Atkins also mentioned Radiohead’s radical pay-what-you-want strategy for its recent album, "In Rainbows," noting that a restaurant in London has started applying the same method for items on its menu.

On a comical note, Atkins highlighted the typical source of income for today’s musicians — namely, activities that don’t involve playing music. "Are there any rock stars here?" he asked. After a few hands hesitantly went up, he added, "Great. Jimmy John’s Sandwiches is looking for some rock stars."