The overriding morals in “Mustang,” the first feature from Turkish-French director Deniz Gamze Ergüven, are traditional and strict. From the opening voiceover, however, it’s clear that its main characters are anything but: “It’s like everything changed in a blink of an eye,” says Lale, the youngest of five adolescent sisters in northern Turkey. “One moment we were fine, then everything turned to shit.”

The girls — exuberant, playful, outgoing — are orphans who are being raised by their grandmother (Nihal G. Koldas) and their uncle Erol (Ayberk Pekcan). And for the offense of splashing around in the sea with some boys after school one day, they are essentially imprisoned in their own home. The real offense, of course, was that a neighbor tattled about it, telling grandma that she saw the girls sitting atop the boys’ shoulders.

“My granddaughters, pleasuring themselves on boys’ necks!” the elderly woman shouts, not believing the not-timid girls when they yell on top of each other, insisting they were just playing a game. (“There’s no such game!” she yells back.)

The grandmother pulled one of the sisters into a room as soon as they walked into the house, before the accusation was clear, leaving the others to determinedly bang on the door even though they weren’t sure what’s going on. Afterward, the five then go to the gossiping neighbor’s house to determinedly bang on hers. Although this is early in the film, viewers may already be crushing on the lovely, spirited, all-for-one teens.

Erol is unsurprisingly outraged when he hears the news. He puts bars on the windows, takes away anything that might “pervert” them, and turns the home into a “wife factory,” according to Lale (Günes Sensoy). She and her older sisters — Nur (Doga Zeynep Doguslu), Ece (Elit Iscan), Selma (Tugba Sunguroglu), and Sonay (Ilayda Akdogan) — are taught how to cook and sew, and when they still manage to sneak out or misbehave (the cover-up of a stealthy excursion to a televised football match is a highlight), their elders start to marry them off. 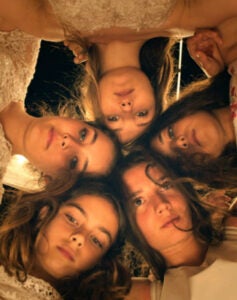 The script by Ergüven and Alice Winocour immediately calls to mind Sofia Coppola‘s “The Virgin Suicides,” and there are moments when the atmosphere in the Turkish home is just as somber. But these sisters are fighters who can still extract joy out of their closely guarded lives, whether they’re pretending that a bunch of blankets is a pool or, during one’s futile attempt to run away, learning how to drive. Little Lale is an especially entertaining pistol, such as when she answers an admonishment by her grandmother for running around wearing a stuffed bikini top with, “Let me breathe!”

When two of the sisters are quickly married, however, the seriousness of their forced paths sinks in, and girlish rule-breaking and backtalk escalate to more sober rebellion. Naturally, the script’s dominant theme is feminism, a kind whose fight must be waged — and approached differently than movements in first-world countries — by women who are raised in old-fashioned families and who refuse to have their lives dictated by traditional roles and expectations.

You root for these characters all the way. With the exception of Iscan, none of the actresses had professional experience, yet these first-timers, strangers to one another, gell into a completely natural-seeming family whose sisterly bonds are stronger than efforts to control them and eventually tear them apart.

The girls’ zest for life and thirst for laughter leaps off the screen, aided by Ergüven’s frequently handheld camera, which follows the five siblings like a ghostly sixth. Their attitudes are reflected in the house, which is airy and bright despite its barred windows. And when one of the girls does sneak out, the open, rural setting is a hint of the world that is waiting for them.

Though “Mustang” was shot in Turkey, it was chosen as France’s official submission for Best Foreign Language Film Oscar consideration. Winning out over the abundance of French releases only reaffirms its achievement: Ergüven and her similarly green cast prove to be preternatural talents in delivering a story that’s simultaneously alarming and loads of tart-tongued fun.