“My Big Fat Greek Wedding 2” was up against “Batman v Superman: Dawn of Justice” and some tough reviews, but Nia Vardalos‘ sequel to her 2002 smash turned out to be worth the wait, opening in third place to $18.5 million over Easter weekend.

That was roughly what it cost Universal Pictures, Gold Circle Entertainment, Playtone and HBO to make the sequel and, since audiences gave it an “A-” CinemaScore grade, the chances are good it will play steadily for the next several weeks and turn a tidy profit. It added another $8 million from overseas this weekend, too.

The crowd was 76 percent female, and 60 percent over the age of 35. In other words, pretty much the same the same group that made the original one of the biggest indie or romantic comedy hits ever, grossing $369 million on a $5 budget.

They liked it better than the critics, who had it at a weak 24 percent positive on Rotten Tomatoes.

“This movie was made for people. Everybody comes from a family, and that lets them relate to these terrific characters created by Nia,” Nick Carpou told TheWrap Sunday. Universal’s distribution chief is Greek, and sounded a bit like an elder in the film’s Portokalos family, saying “I like to see people happy.” 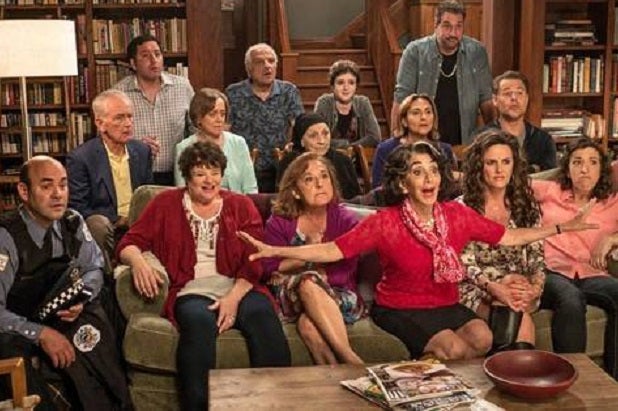 The 14-year delay for “My Big Fat Greek Wedding 2” was mainly due mainly to Verdalos’ reluctance to take on a family comedy, and the accompanying media attention, while she and husband Ian Gomez were having problems starting their own family. That all changed when they became adoptive parents, she explained in her book “Instant Mom.”

“It’s kind of funny, because not only was there this big wait, but there was no cataclysmic event,” Jeff Bock, an Exhibitor Relations Co. analyst told TheWrap before the opening. “Usually with a sequel like this, somebody gets divorced or dies, but here it seems they just keep on doing what they did.”

With audiences offering the traditional Greek toast “Opa!,” Universal has added another successful counter play to its resume. In December, the studio sent out “Sisters,” the R-rated comedy starring Tina Fey and Amy Pohler, to take on “Star Wars: The Force Awakens.” It didn’t dent the blockbuster, but the $30 million production has grossed $105 million so far.

Universal was also behind “Mamma Mia!.” That musical comedy starring Meryl Streep, Pierce Brosnan and Colin Firth took on “The Dark Knight” in 2008. It opened to an impressive $27 million and went on to take in $610 million on a $52 million budget.