Other than one unproduced pilot script, Shonda Rhimes had never written a TV episode until 2005, when she created “Grey’s Anatomy.” An instant critical and commercial hit, the show remains a much-buzzed-about bulwark of ABC’s schedule to this day. Rhimes also created its spinoff “Private Practice,” now in its third season, making her probably the most successful African-American female producer in primetime television history. She spoke with Eric Estrin about her competitive nature, how motherhood shaped her career and why she’s really not that special after all.

I had just graduated from Dartmouth in New Hampshire, and I had no idea what to do with my life, so I was living at my sister’s house in San Francisco, trying to figure it out.

I read an article in the New York Times that said it was harder to get into USC Film School than it was to get into Harvard. I’m from a family of academics. My parents were pressuring me to go to graduate school, and I’m a very competitive person, so I thought, well, if this is the hardest thing I could try, I will apply and see what happens. So 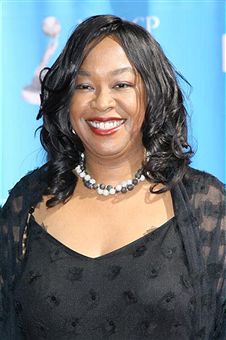 I applied to USC Film School, and I got in.

I got an internship while I was in film school with Debra Chase when she was running Mundy Lane, which was Denzel Washington’s company. And then when I got out, she helped me get a job as an assistant at Paula Weinstein’s company, Spring Creek.

Working at Spring Creek was really an education because, as an assistant you sit behind a desk, and I would watch the spec scripts come in. And I was reading all these spec scripts, and that really helped me understand what people were looking for.

I left Spring Creek to really write spec scripts and took a job working outside the industry, so I had a job I didn’t take home with me at night. During that period of time, you know, I sold my CDs for my gas, and I bugged my parents for money, and they were as supportive as they could be in a world in which they thought their daughter should be going to graduate school.

I had gotten an agent coming out of film school who was very patient with me, and when I finished my spec script we put it out, and I remember sitting there thinking, I don’t really have a Plan B. If this doesn’t work, I’ve gotta leave town because I can’t do this very much longer.

I wanted to be able to do something. The waiting to be noticed, the waiting for somebody to think your work is any good — it was painful.

And then it sold. My spec script sold in eight hours. It never got made, but it got put in turnaround twice, so I got paid for it twice, and that fed me for quite some time.

I had been writing a bunch of movies and my life was sort of going along quite lovely, and I had this great existence, but then I adopted a baby. What happens when you adopt a baby is your life changes completely. I went from being the girl who would go out at night with her friends to being a girl who was up at night with the baby. And I started watching a lot of television, because I was home.

I watched things like the entire seven seasons of “Buffy.” And I watched “24.” Literally, I watched one season of “24” in 24 hours. And I realized that television was where really good character development was happening.

So I went to my agents and I said I’d love to try to write television, and they said, well, OK. So they set me up to meet with Suzanne Patmore who was at that time an executive at Touchstone, and she said, "Great, let’s do a pilot."

I wrote a pilot for ABC about war correspondents — four really competitive women who drank a lot and had a lot of sex while they covered wars. And then we went to war, and so the pilot felt sort of inappropriate.

But I really liked the concept of four women who drank a lot and had a lot of sex while they did something. And the next year I said, well, I’ll try it again, and Suzanne said great. So ABC bought another pilot from me, and it was “Grey’s.”

So that doesn’t make me any more special than anybody else.